Exports from the United States to Mexico registered a year-on-year growth of 33.3% from January to September 2021, to 204.2 billion dollars, the Commerce Department reported this Thursday.

Mexico was positioned as the first commercial partner of the United States, being its second export market, after Canada, and its second supplier of products, surpassed by China.

Among the exports from the United States to its southern neighbor are petroleum oils (except crude), auto parts, integrated circuits, gas, computers, piston engines, and machine parts and accessories.

Exports from the United States

Data are goods only, on a Census Basis, in billions of dollars, unrevised. Year-to-Date Total Trade

For these estimates, among other aspects, it considers fiscal projections that take into account the baseline of the Congressional Budget Office of July 2021, adjusted according to the IMF staff policy and macroeconomic assumptions.

Conversely, foreign sales from Mexico to the United States were 282,485 million dollars from January to September 2021, an increase of 21.4% at the annual rate. 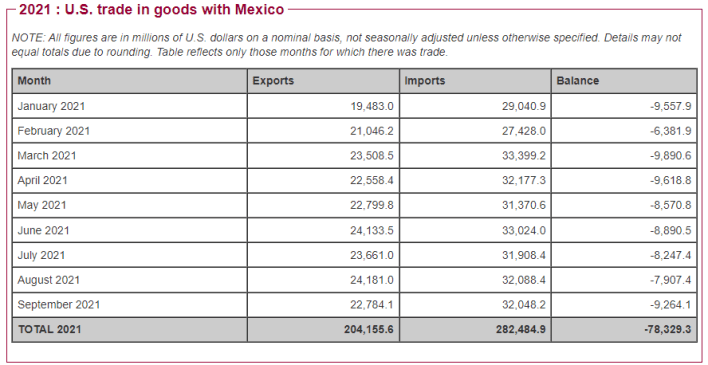 More than anything, Mexico exports cars, computers, freight vehicles, monitors, projectors, crude oil, and telephones to the US market.

US exports to the Mexican market have registered a 1% annual drop on average from 2016 to 2020.