Exports from Mexico totaled 40,313.4 million dollars in August, which represented a 9% growth at an annual rate, informed the Inegi.

This result was derived from increases of 6.9% in non-oil exports and 53.1% in oil exports.

Within non-oil exports, those directed to the United States grew at an annual rate of 6.3% and those channeled to the rest of the world did so by 9.3 percent.

With series adjusted for seasonality, in August 2021 total merchandise exports showed a monthly decline of 4.58%, the result of falls of 4.48% in non-oil exports and 6.00% in oil exports.

Exports of manufactured products reached 35,557 million dollars in August 2021, which represented an advance of 6.1% at an annual rate.

The most important annual increases were observed in exports of steel products (70.4%), plastic and rubber products (26.2%), food, beverages and tobacco (18.8%), electrical and electronic equipment and appliances ( 15%) and machinery and special equipment for various industries (7.6 percent). 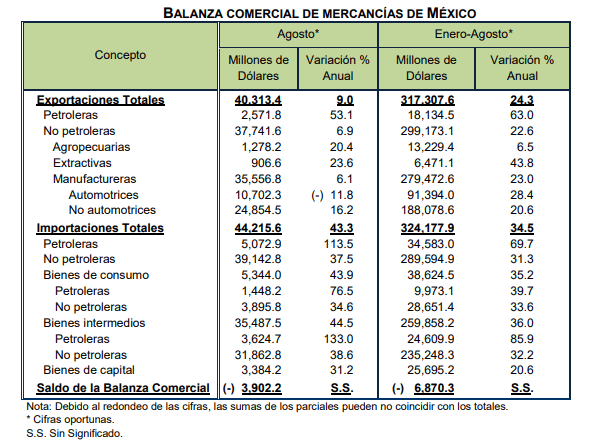 For their part, exports of automotive products showed an annual decrease of 11.8%, which was the result of a 12.4% decline in sales channeled to the United States and a 9.3% reduction in those directed to other markets.

Meanwhile, the value of agricultural and fishing exports in the eighth month of the current year was 1,278 million dollars, an amount that implied an increase of 20.4% at the annual rate.

In contrast, the most relevant falls occurred in exports of cattle (30.8%) and mango (9 percent).

As for Mexico’s exports in the extractive sector, these were located at 907 million dollars with an annual increase of 23.6 percent.

Finally, in the period January-August 2021, the value of total exports totaled 317,308 million dollars, which meant an annual increase of 24.3 percent. This rate was derived from growth of 22.6% in non-oil exports and 63% in oil.