Mexico’s exports totaled $ 38,399 million in March 2020, reflecting a 1.6% drop compared to the same month the previous year, the Inegi reported.

Within non-oil exports, those directed to the United States grew at an annual rate of 1.2% and those channeled to the rest of the world grew by 1.8 percent.

With seasonally adjusted figures, in March of this year total merchandise exports reported a 3.87% monthly drop, which was the result of 3.04% decreases in non-oil exports and 21.70% in oil exports. 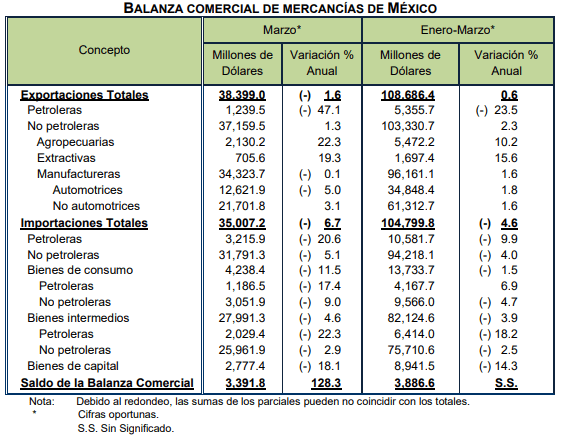 Timely foreign trade information from March 2020 indicates a trade surplus of $ 3.392 billion; this balance is compared to the surplus of 2,911 million dollars reported in February.

The expansion in the trade balance between February and March was the net result of an increase in the surplus of the balance of non-oil products, which went from $ 4.402 million in February to $ 5.368 million in March, and an increase in the deficit in the balance of petroleum products, which went from (-) 1,492 million dollars to (-) 1,976 million dollars in the same comparison.

In the first three months of this year, the trade balance presented a surplus of $ 3,887 million.

The most important annual decreases in manufacturing were observed in exports of automotive products (-5%), textiles, clothing and leather industry (-4%), professional and scientific equipment (-1.9%), of chemical products (-1.6%) and of electrical and electronic equipment and devices (-1.2 percent).

In contrast, the greatest increases were in exports of machinery and special equipment for various industries (11.2%) and food, beverages and tobacco (5.5%).

In turn, the annual decrease in exports of automotive products was the net result of a 7.3% decrease in sales channeled to the United States and a 6.2% advance in sales directed to other markets.

Imports from Mexico decrease 6.7% in March