Driven by exports, Canada’s economic activity expanded 10% at a seasonally adjusted quarterly rate during the third quarter of 2020, after contracting 11.5% in the second quarter.

Expressed as an annualized and seasonally adjusted quarterly rate, Canada’s GDP growth in the third quarter of the year was 46.4%, after a 38.7% drop in the previous quarter.

In addition to exports, the recovery in private consumption contributed to this recovery.

For its part, the unemployment rate decreased from 9.0% in September to 8.9% in October.

However, according to Banco de México, more opportune indicators such as retail sales, consumer confidence, business optimism and mobility indicators, suggest a moderation in the rate of recovery of economic activity in the fourth quarter as a reflection of the reimposition of containment measures derived from the sharp increase in Covid-19 cases.

Canada is one of the world’s leading trading nations. Canada’s exports have always reflected the country’s large endowment of natural resources.

While Canada’s foreign sales have diversified over time, commodities remain a significant part of Canada’s exports.

According to its own government, Canada continues to have strong trade ties with the United States, the European Union and China, its three main trading partners.

Exports of goods to the United States and the European Union grew well, supported by free trade agreements with these partners.

In particular, the Comprehensive Economic and Trade Agreement, in its second year of provisional application, continues to support Canadian foreign sales to the European Union. 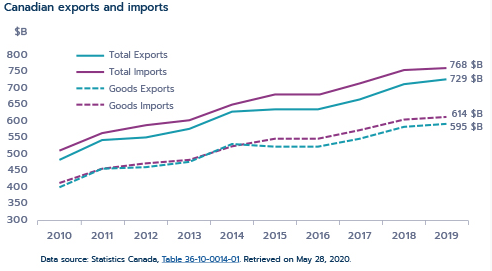 However, says the Canadian government, there are indications that Canadian exporters and importers are not fully utilizing the agreement, suggesting that further efforts may be needed to promote the agreement.