Evergrande, with around $ 304 billion in total liabilities, including some in offshore markets, has recently seen its bond prices hit difficult levels and its share price fell more than 70% since mid-2021.

Against the backdrop of a regulatory campaign to curb the large and highly leveraged real estate sector, market participants have become increasingly concerned about a possible default by Evergrande, one of China‘s largest real estate developers, reports a released analysis by the International Monetary Fund (IMF).

So far, the contagion has been limited to other financially weak real estate developers and companies with lower ratings.

However, according to the same analysis, while the authorities have the tools to intervene if the situation worsens, there is a risk of broader financial tensions arising, with extreme implications for both the Chinese economy and financial sector and for the markets capitals of China.

The analysis, prepared by Fabio Natalucci and Helge Berger, concludes that there are several macro-financial channels through which tensions can be transmitted.

In terms of possible internal financial effects, the aggregate direct exposures of Chinese banks to Evergrande appear to be limited, although smaller banking institutions with weaker capital positions may face challenges.

However, if the stress were widely extended to the property development sector in general, the exposures of the financial system would be significantly higher.

Several financial institutions are involved (including banks, trust companies and other shadow banking entities), directly through loans, bonds and other credit instruments, as well as indirectly through guarantees and contingent liabilities, often through channels opaque and difficult to quantify that create a high degree of interconnection within the financial system.

In addition, since property developers account for a significant portion of loans in offshore markets, these markets could be stressed and create funding challenges for other issuers as well.

China: Evergrande and developers under pressure 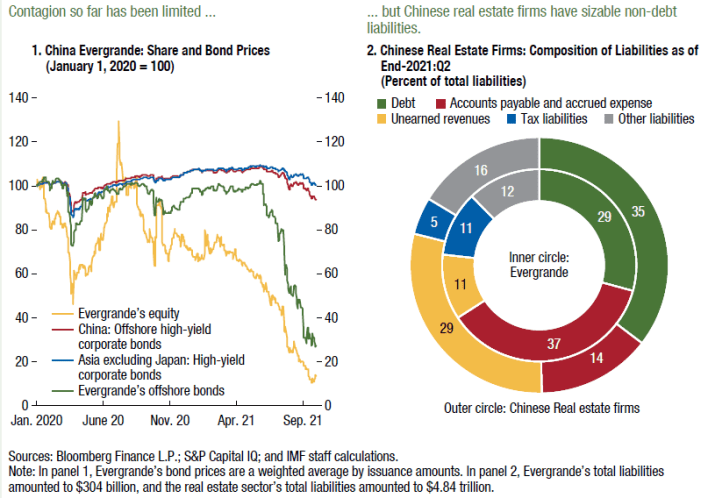 Overall, the authors warn, the macroeconomic impact by the company could greatly magnify the impact of financial stress, with a feedback loop of financial conditions.

The knock-on effects on real estate companies could have an adverse impact on growth given the considerable liabilities to various counterparties.

Finally, a slowdown in economic growth and a tightening of financial conditions in China could have contagion effects to the rest of the world, for example, through direct exposures by international investors to Chinese financial assets (which have been growing as a result of of the inclusion of China in global benchmarks), a deterioration in global risk appetite at a time when asset valuations are stretching and a tightening of financial conditions in emerging markets.

What should Chinese politicians do?

For both analysts, it is necessary to strengthen the frameworks for corporate restructuring and longer-term insolvency to facilitate the market-based exit of non-viable companies.

In the short term, the tools are available to contain and manage potential financial stress and reduce any adverse impacts on the economy.

However, there are challenging trade-offs in terms of the extent of support to affected financial entities and sectors and the timing of intervention.

The broader the support measures, especially if they are accompanied by a real or perceived relaxation of the broader effort to deleverage the financial system over time, the greater the risk that financial weaknesses will re-emerge in the future.

Similarly, early and clearly communicated intervention would likely minimize the risk of contagion, albeit at the cost of reinforcing the perception that individual companies are too big to fail. However, postponing support for the financial system to instill market discipline may require broader measures to manage financial stress.