The United States is shaping up to record a record year for wind turbine installations, according to data compiled by the Energy Information Administration (EIA).

Project developers expect more than 23 gigawatts (GW) of wind turbine generating capacity to come online in the United States in 2020, far more than the previous record of 13.2 GW added in 2012.

Another 18.5 GW plan will come into operation from September to December, according to project schedules reported to the EIA by power plant owners and developers.

December is typically the month with the highest number of wind turbine capacity additions.

In the previous 10 years, 41% of the annual wind capacity additions came online in December. 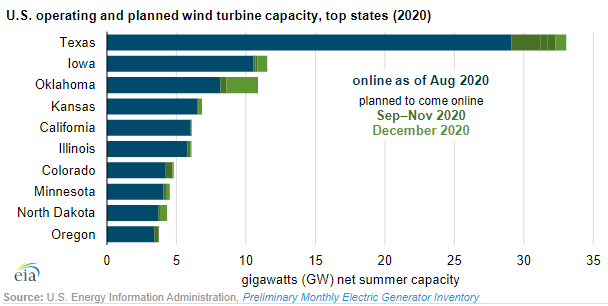 The impending elimination of the full value of the U.S. Production Tax Credit (PTC) by the end of 2020 is leading to more capacity additions than average this year, just as previous tax credit reductions led to significant additions of wind capacity in 2012 and 2019.

Turbine projects that are online through 2023 and that began construction in 2019 qualify for lower PTC values.