Natural gas generation in the lower 48 states of the United States increased nearly 55,000 gigawatt hours (GWh), or 9%, in the first half of 2020 compared to the first half of 2019, reported the Energy Information Administration (EIA, for its acronym in English).

This gas was the fastest growing source of electricity generation in that country, according to data from the EIA Hourly Power Grid Monitor.

The increase in gas generation was the result of recent low prices and natural gas power capacity additions, despite a 5% decrease in total electricity generation.

The decrease in electricity consumption was due to reduced business activity as a result of Covid-19 mitigation efforts.

Generation of this gas from electric power plants reached record levels on July 28 when the summer heat began to reach its seasonal peak.

Coal generation absorbed most of the decrease in electrical load in the first half of 2020, registering a decrease of 138,000 GWh (30%) in production.

Due to historically low natural gas prices so far in 2020, coal-fired generation this year has been uneconomical in most regions compared to natural gas generation, leading to a fuel switch of price-driven natural gas coal.

The shift from coal to natural gas was most prominent in the PJM interconnection (PJM), which covers an area stretching from New Jersey to Illinois, and the Mid-Continent Independent System Operator (MISO), which primarily includes areas in between. West. 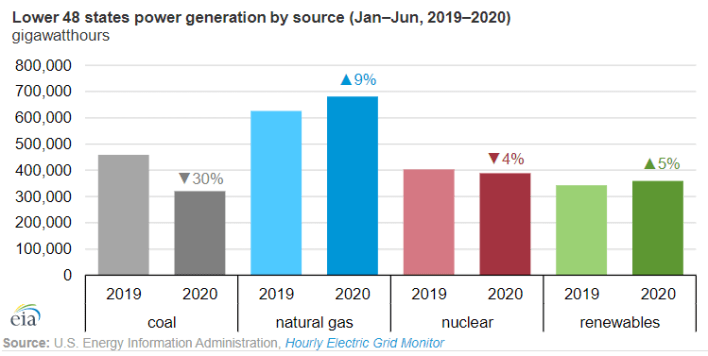 PJM and MISO together represent about 35% of the total electric power generation of the lower 48 states.

In both interconnections, there is competition between gas and coal as generation fuels, so relative changes in fuel prices can influence the type of power plant that is dispatched.

Renewable energy, which consists of wind, solar and hydroelectric generation, has increased by about 5% and has been the only other source of fuel besides natural gas that has grown in the first half of 2020.