The largest investments in 2020 in Latin America were made in the energy sector, both in electricity and hydrocarbons, reported the Economic Commission for Latin America and the Caribbean (Cepal).

The construction and concession of infrastructure and logistics, agrochemicals and the pharmaceutical industry also aroused the interest of transnational companies from outside the region.

ECLAC highlighted that by 2020, three agreements of magnitude related to the digital economy were closed, and they are not only for data centers as happened in previous years.

In 2020, US-based Sempra Energy sold its assets in Chile and Peru to Chinese state-owned companies. 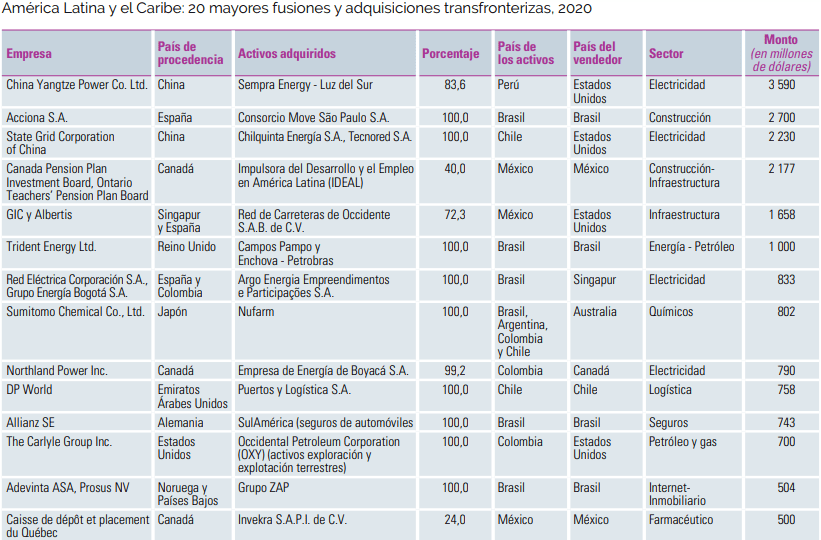 On the other hand, in Chile, State Grid Corporation of China acquired Chilquinta Energía S.A. for 2,230 million dollars, a transaction through which it will also control the company Tecnored S.A., which provides construction and infrastructure services, and 50% of Eletrans S.A., which is dedicated to the transmission of electric power.

The sale of Petrobras assets continued to generate some of the largest operations in the region.

Another significant operation was registered in Argentina with the purchase of 49% of the Bandurria Sur land block of the Vaca Muerta deposit by the European companies Royal Dutch Shell plc and Equinor.