El Puerto de Liverpool made significant progress in modernizing and expanding the e-commerce platform in 2021, which was implemented in Suburbia in both its Web version and mobile application.

Liverpool is the department store chain with the greatest coverage in Mexico.

The company‘s ecosystem became even more customer and sales focused.

Its apps continued to incorporate various services, such as the Digital Electronic Wallet or the payment of services, for which they represented the majority of digital sales. 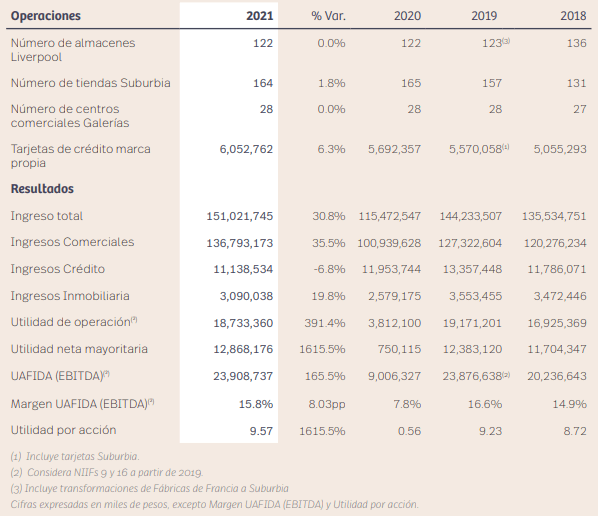 At the same time, the Personalization project, which incorporated the “Carousel” format, showed merchandise suggestions aligned with customer preferences, obtaining an increase in sales.

The digital customer base increased by nearly 20 percent.

As for Omnichannel, the online offer of products with same-day delivery in Liverpool stores and home delivery in 24 hours (express format) was enabled.

In credit, the platform for the management of consumer credit in Suburbia was released, where the client will be able to obtain merchandise with a down payment, fixed interest rate and immediate delivery.

Together with the warehouses and stores, the digital operation reaffirmed the omnichannel nature of El Puerto de Liverpool in 2021, which continued to post a solid performance.

Digital sales grew 4.7% compared to the previous year and 2.7 times compared to 2019. Digital participation was 22.6% in the year.

The new version of the warehouse and store provisioning platform was launched for the picking, packing and shipping processes.

During the year, Logistics reached 94% of the delivery promise with an improvement of 4 percentage points against the previous year, our goal for 2025 is 99 percent.

The assortment from the store strengthened the competitive advantage, increasing its participation 2.6 times.