In its January Short-Term Energy Outlook (STEO), the United States‘ Energy Information Administration (EIA) expects global demand for petroleum liquids to be greater than global supply in 2021, especially during the first quarter, which That will cause an inventory cut.

The EIA expects growth in crude oil production from the Organization of the Petroleum Exporting Countries (OPEC) members and partner countries (OPEC +) to be limited due to a multilateral agreement to limit production.

Saudi Arabia announced that it would voluntarily cut production by an additional 1.0 million b/d during February and March.

Even with this cut, the Energy Information Administration expects OPEC to produce more oil than last year, forecasting that OPEC crude production will average 27.2 million b/d in 2021, down from an estimated 25.6 million b / d in 2020.

The Administration forecasts that U.S. crude oil production in the lower 48 states, excluding the Gulf of Mexico, will decline in the first quarter of 2021 before increasing through the end of 2022. 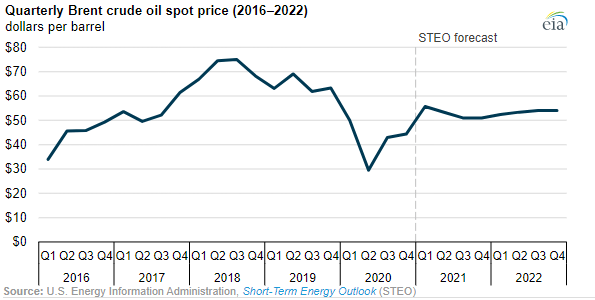 It also projects that responses to the recent increase in Covid-19 cases will continue to limit global demand for oil in the first half of 2021.

However, based on Oxford Economics global macroeconomic forecasts, the EIA predicts that global gross domestic product will grow by 5.4% in 2021 and 4.3% in 2022, which translates into growth in energy consumption.