Economic integration between Mexico and the United States increasingly occurred from the beginning of the North American Free Trade Agreement (NAFTA) until the mid-1990s, according to a report by the International Monetary Fund (IMF).

In the manufacturing sector, about half of domestic value added now comes from foreign demand.

Moreover, in the automotive industry, the proportion is 80 percent.

Most of Mexico’s exports are sent to the United States. 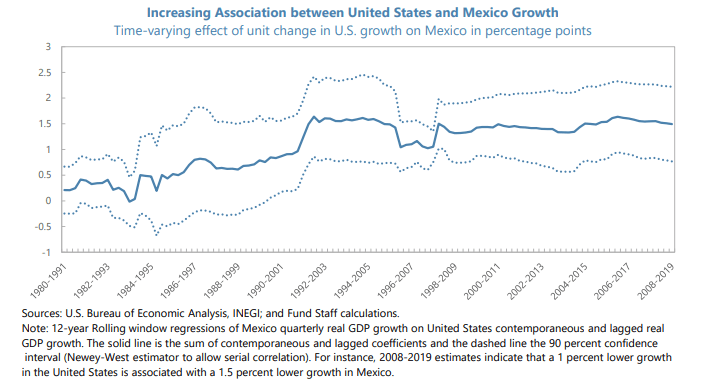 The Mexican economy has also attracted foreign investors, with gross international liabilities increasing from around 50% of GDP in 2001 to close to 100% of GDP in 2021.

As a result of this growing integration, the Mexican business cycle has become increasingly associated with that of the United States.

A regression analysis with a moving time window illustrates this pattern, reports the IMF.

The IMF indicates that much of the increase appears to reflect the trade channel. Although the manufacturing sector accounts for only one-fifth of GDP, it explains about three-quarters of Mexico’s short-term GDP fluctuations.

Output in this sector is much more reactive to short-term developments than output in the rest of the economy.

In addition, during the post-pandemic recovery, Mexico benefited from a shift in U.S. consumption from services to goods, but this may be an additional headwind in the coming year as the composition of demand is expected to normalize.