All digital technologies together – the Internet of things, big data analysis, cloud computing, augmented reality and the use of platforms – constitute a central component of the fourth industrial revolution, highlighted the ECLAC in a report.

However, digital technologies are in different stages of development and penetration in the business world.

On the one hand, they favor companies in developing countries, as they reduce transaction costs and facilitate access to markets and integration into global value chains.

On the other hand, digital technologies reveal and deepen the technological gap with industrialized countries and accentuate the market power of large digital platforms, stimulating phenomena of economic concentration that penalize less developed countries.

In fact, according to ECLAC, digitally enhanced international production networks tend to concentrate more value in a few developed economies, primarily the United States, and have a clearly light international footprint in terms of physical assets. Automation is based on the use of advanced robots.

At present these technologies are limited to a few sectors, among which the automotive and electronics stand out.

However, the decline in robot prices will cause their use to expand rapidly.

Thus, the increasing robotization of production will erode the competitive advantage of low-cost production centers in developing countries.

However, given the growth of robots in some major global manufacturing centers (such as China, India and Mexico), the incentive for TNCs to relocate their production to their home countries is also likely to be reduced.

In fact, some companies with investments in those countries may decide not to move given the high levels of capital investment involved, initiatives to build a network of suppliers, and the availability of trained human capital.

To the extent that other technologies, such as additive manufacturing (3D printing), have technical and economic feasibility, they could also affect the organization of international production. 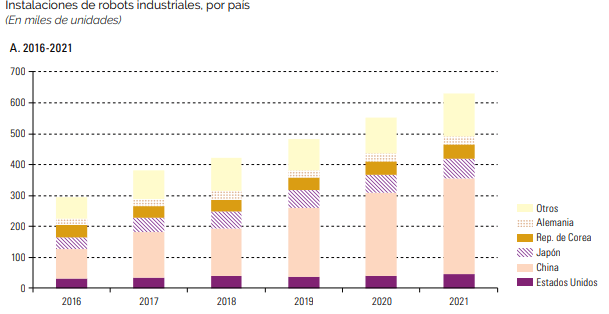 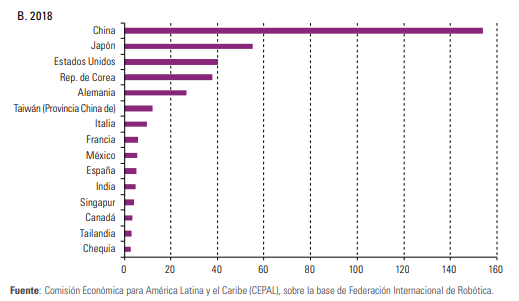 3D printing could drive a reconfiguration of localized production on a small scale.