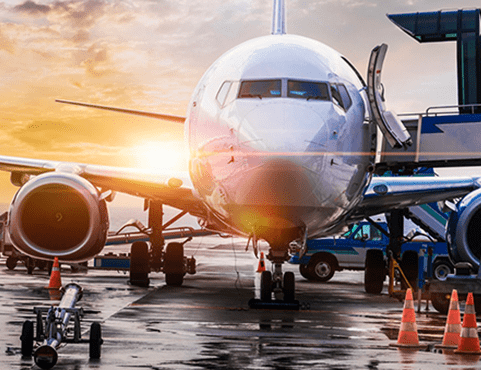 Demand for jet fuel grew in March and April, according to information from the US Energy Information Administration (EIA).

First of all, the number of passengers traveling by air in the United States has increased in recent weeks, which may be the result of normal seasonal increases, the reduction of Covid-19 restrictions and the increase in rates of vaccination.

According to the EIA, the increase in U.S. air traffic is likely to continue through the rest of the year as more people get vaccinated and U.S. travelers become more comfortable with air travel.

The Transportation Security Administration (TSA) tracks and publishes the number of passengers moving through TSA airport checkpoints on a daily basis, estimating how many people fly into the United States each day.

Thus, in February 2020, just before responses to the pandemic resulted in substantial reductions in air travel, the TSA processed an average of 2.2 million air passengers per day.

However, in April 2020, when the impact on air travel peaked, the TSA passenger rate dropped to 0.1 million passengers per day.

In March 2021, TSA’s average daily passenger throughput reached 1.2 million, the highest monthly average throughput since the onset of the pandemic. 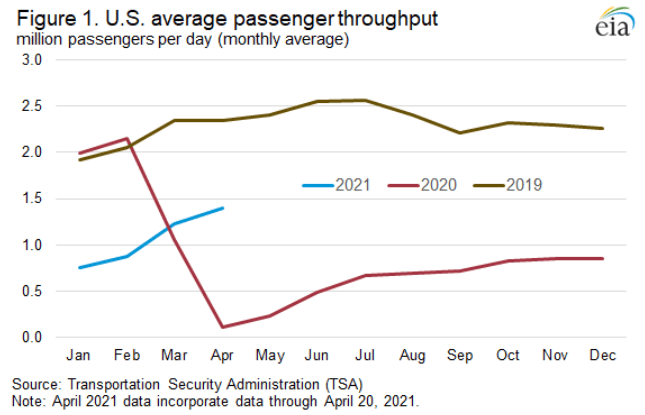 Passenger volume in April 2021 has continued to increase, averaging 1.4 million passengers per day as of April 20.

Demand for jet fuel, as reported in the WPSR, may appear to be lagging behind increases in passenger travel, possibly because airports are sometimes based on on-site jet fuel inventories, which it is considered secondary storage and does not count in WPSR inventories. 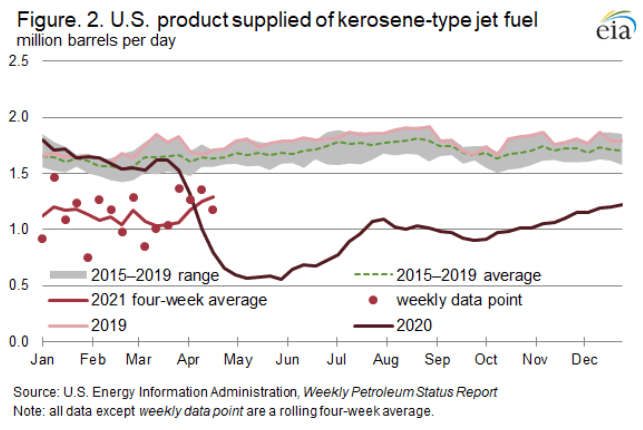 As airports move to recharge their on-site capacity, they turn to primary storage sites like refineries or bulk terminals.