The demand for honey in the United States continues to grow, with a 2020 use of 571 million pounds, this is 8% more than in 2019, reported the Department of Agriculture (USDA).

Likewise, the growth trend of the demand for honey per capita in the United States from 1986 to 2020 is approximately 0.016 pounds per year, increasing from approximately 0.8 pounds to 1.3 pounds. 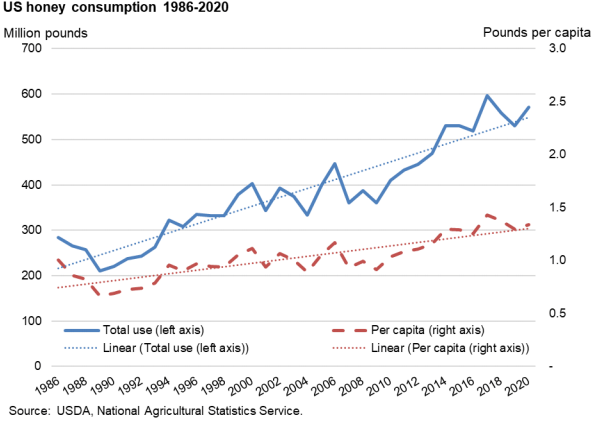 This represents an increase of about 0.5 pounds per capita over 35 years.

This higher growth in the last decade is correlated with increased consumer attention to foods that are perceived as healthier and increased demand for organic foods.

The Covid-19 pandemic sparked a global surge in demand for “halo” crops, sometimes called “superfoods,” which are perceived as medicinally beneficial, such as ginger, turmeric, and garlic.

The prices of many of these crops have skyrocketed in the past year.

Honey is also considered by some consumers to be a “superfood” due to its nutritional benefits. 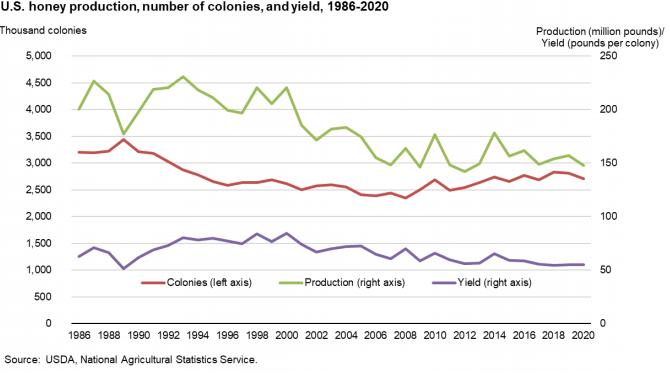 However, in the United States at least, the demand for honey has not seen as substantial an increase as some of the other “superfoods” did.

Although the honey industry lost more than 1,000 workers related to the Covid-19 pandemic, production was down just 6 percent from the previous year.

Also the number of producing colonies decreased, to approximately 2.7 million from 2.8 million in 2019.