Through its segment Trucks North America, Daimler Truck aims to build on its success in professional trucks and launch another product for this market segment in 2022.

The company also has series production of the battery-electric eCascadia scheduled to begin in 2022.

At the beginning of 2023, the eM2, another locally CO2-neutral truck, will go into series production. 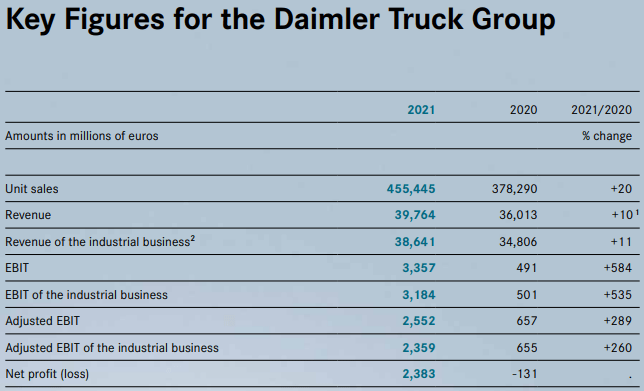 At the same time, Trucks North America continues to work to bring series-produced (SAE Level 4) autonomous trucks to the roads by the end of the decade.

The Trucks North America segment achieved sales of 162,200 trucks (+16.3%) in 2021 due to market recovery and despite bottlenecks in supply chains, particularly for semiconductors.

Mercedes-Benz is going ahead with CO2-neutral transport.

While the series model of the eActros is being delivered to customers in Europe, the next model to enter customer testing and series production is the eEconic in 2022.

In addition, the segment is working with various partners to drive the development of charging and refueling infrastructure in Europe.

In addition, the segment is implementing additional measures to improve profitability, for example, programs to reduce personnel costs or optimize the existing product portfolio and the associated reduction in the number of base models.

Trucks Asia aims to boost CO2-neutral transportation and launch the production version of the next-generation all-electric FUSO eCanter in 2022, first in Japan and later in other markets such as Europe.

The segment intends to expand its position in China, the world’s largest market for heavy commercial vehicles.

To this end, it will accelerate the localization of Mercedes-Benz heavy-duty (H6) semi-trailer tractors in a joint venture with BFDA.

Daimler Buses is focusing on growth in profitable markets and in that context it will enter the North American market with a new Mercedes-Benz coach tailored to local requirements. The market launch is scheduled for 2022.

There are also other products in preparation for 2022 in terms of CO2-neutral driving: the next generation of lithium-ion batteries for Europe and the first electric chassis for Latin America.