The Cummins company reported that it reported revenue of $ 19.8 billion in 2020, 16% less than the previous year.

On the other hand, Cummins sales declined in all major regions except China, where demand for trucks and construction equipment reached record levels.

In each of its operating segments, Cummins competes around the world with other manufacturers and distributors who produce and sell similar products.

First of all, according to the company itself, its products compete primarily based on performance, fuel economy, delivery speed, quality, customer service and price.

The largest customers for its heavy truck engines include truck manufacturers such as PACCAR Inc., Navistar International Corporation, and Daimler Trucks North America.

Major customers for its medium-duty truck engines include truck manufacturers such as Daimler, Navistar and PACCAR.

The main customer for our on-road pick-up engines is Chrysler.

In the markets served by its engine segment, Cummins competes with independent engine manufacturers as well as OEMs that build engines for their own products.

Meanwhile, its main competitors in international markets vary from country to country, and local manufacturers generally predominate in each geographic market.

“We face many challenges in 2020 driven by the severe global impact of the Covid-19 pandemic,” said President and CEO Tom Linebarger.

“I want to thank all of our employees for their dedication to our company and our customers as they adapted to the unprecedented slowdown in the global economy and then responded when demand accelerated dramatically in the second half of the year, all while facing significant disruption. in their daily routines at work and at home,” Linebarger added. 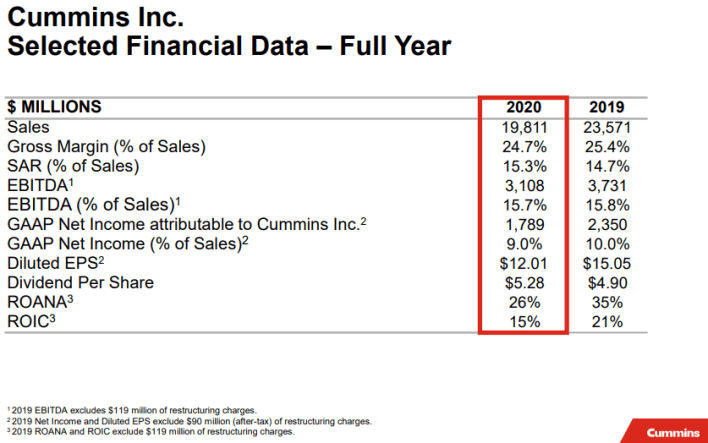