The Comprehensive and Progressive Agreement of Trans-Pacific Partnership (CPTPP) and Free Trade Agreement (FTA) with the European Union (Japan-EU EPA) will lower agricultural prices in Japan, according to a report from the World Trade Organization (WTO).

The Japanese government believes that, as a result of the full implementation of the CPTPP and the Japan-EU EPA, there will be decreases in the prices of certain agricultural, forestry and fishery products

The agricultural products expected to be the most affected are pork and dairy under the Japan-EU EPA and beef, dairy and pork under CPTPP.

However, the Japanese government is of the opinion that domestic production volumes and farmers’ incomes will be maintained through government measures.

Coinciding with the entry into force of TIPAT in 2018, Japan increased support for domestic pork producers by expanding the Business Stabilization Measure for Pig Producers (also known as Marukin).

Marukin’s payment system for pork covers 90% of the cost gap.

Pork producers pay 25% of the grant amount from the reserve fund (compared to 50% before the expansion of the system).

In 2018, average employment was estimated at 66.6 million, of which 23.5% were employed in mining, manufacturing, and construction, 3.4% were employed in agriculture, forestry, and fishing, and 73.1% in services and other sectors.

Commercial agricultural households can be classified as: part-time or full-time; or as a business, semi-business or side business.

Almost half of commercial farm households are primarily engaged in rice production, and more than half of the cultivated land is devoted to rice production. 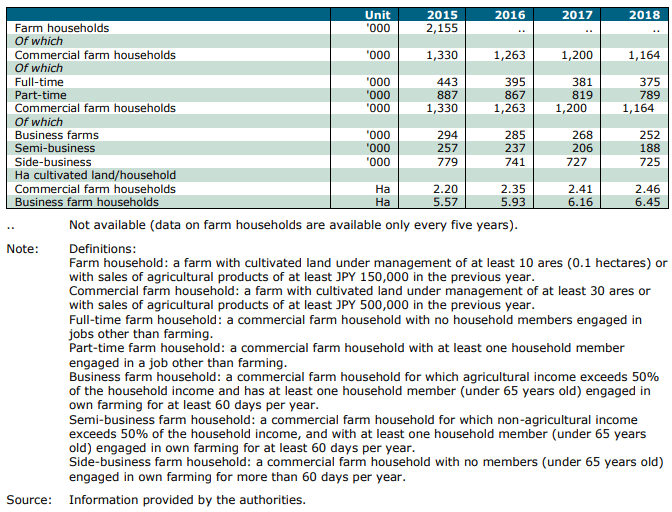