The container throughput index of the RWI-Leibniz Institute for Economic Research and the Institute of Shipping Economics and Logistics (ISL) increased to 111.5 in June according to the latest preliminary estimate.

The most important reason is a sharp increase in Chinese ports.

The index rose slightly in June, seasonally adjusted, from 107.7 to 111.5. However, this is still 4.3% lower than the previous year’s figure.

The May value corresponds to the flash estimate. The figures for March and April have been revised upwards by 1.5 and 0.9 points respectively.

This was due to a subsequent change in the data for a Korean port.

Chinese ports were the driving force behind the recovery in traffic. Its management increased (seasonally adjusted) by 5% compared to the previous month and reached an all-time high.

The North Range Index, which gives an idea of ​​economic development in the north euro area and in Germany, fell again and at 100.0 it is 1.1 points below the corrected value for May.

“The development of container throughput indicates a stabilization of world trade. However, the differences between regions remain large,” said Torsten Schmidt, chief economic officer at RWI.

The index includes data on 91 international ports, which ISL collects continuously as part of its market observation and accounts for around 60 percent of global container transshipment.

Since international trade is mainly handled by sea, container transshipments allow reliable conclusions to be drawn about world trade. 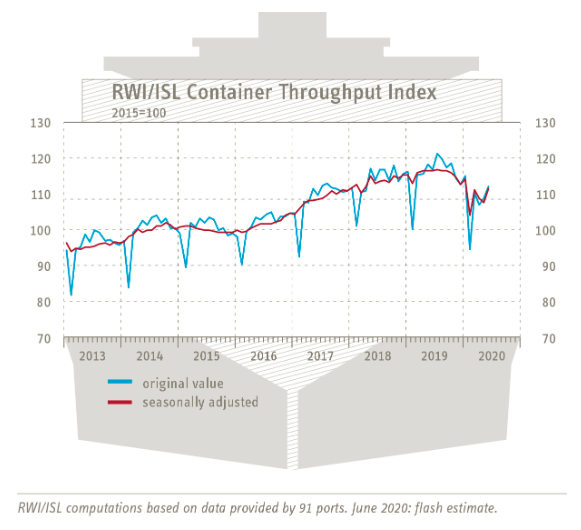 Because many ports already report on their activities two weeks after the end of a month, the RWI / ISL Container Handling Index is a reliable early indicator of the development of international trade in processed goods, and therefore also of world economic activity.

A seasonally adjusted container port performance index declined 8% yoy in May 2020, with no clear signs of bottoming.

According to the World Trade Organization (WTO), the decrease in 2020 is less than the 14% drop from peak to minimum during the financial crisis of 2008-09, indicating some resistance in container shipping to the pandemic from Covid-19.