Container shipping fell to 92.4 points in an index released this Thursday by the World Trade Organization (WTO).

In particular, this indicator is based on the index of container movement of the main international ports of the Institute of Shipping Economics and Logistics (ISL, for its acronym in English).

The latest figures from the ISL Container Port Monitor indicate that overall container handling results for the current year are significantly below expectations at the beginning of the year.

While the handling of the 92 covered ports increased for the second time in a row to 41.6 million TEU / month in June, the figures for the first half of the year remain well below expectations.

However, compared to June of the previous year, this result represents a decrease of 4.5 percent.

In addition, for the seventh consecutive time, a negative result was obtained year-on-year.

A look at the semi-annual results also indicates that only a few regions can achieve positive annual performance; only ports in Africa and Latin America will see nearly balanced results, according to the ISL.

However, with market shares of 2.5% and 5.3% respectively, they contribute relatively little to container shipping in the world. 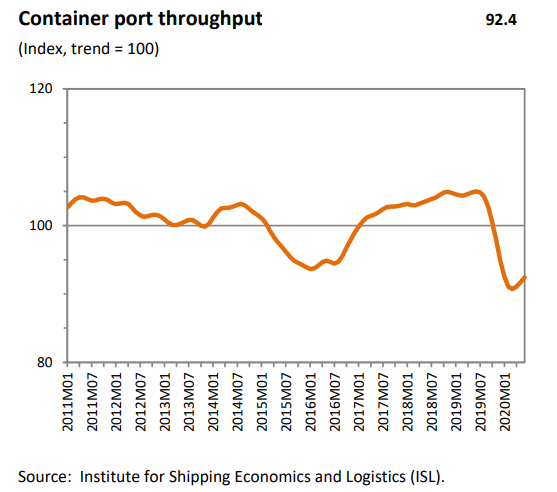 Container shipping is part of the WTO Barometer of Trade in Services.

Readings of 100 indicate growth in line with medium-term trends. Readings above 100 suggest growth above trend, while readings below 100 indicate the opposite.