The UNCTAD expects global container port traffic to grow 10.1% in 2021, as the global economy and trade recover, along with growing optimism stemming from the launch of the vaccine.

This projection was taken before the outbreak of the Omicron strain, especially contagious of the Covid-19 virus.

But some ports fared better than others.

For example, the port of Antwerp fared much better in the Covid-19 crisis than it did during the 2009 recession. 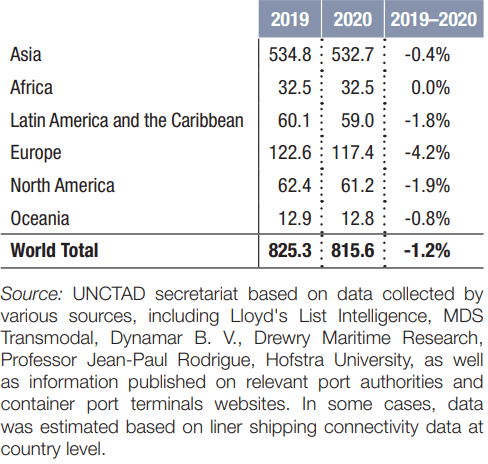 In 2020, Asia, with almost two-thirds of the movement, maintained its position as the global hub for container port traffic.

North America and Asia benefited from the rapid rebound in trade in the second half of 2020, but recurring virus outbreaks and pandemic containment measures, among other factors, were a drag on container traffic at the ports of Europe and other regions.

Also China‘s dominance is evident from data on the world’s top 20 ports, about half of which are in China.

In 2020, cargo movement in these leading ports declined, although there were some exceptions, notably Tanjung Pelepas with growth of 7.7 percent and Long Beach, which benefited from an increase in containerized imports from the United States.

In the fourth quarter of 2020, volumes in Long Beach increased 23 percent.

Likewise, Los Angeles enjoyed 22% growth in the last quarter of the year, but still closed the year with a 1.3 percent drop.

Nearly all leading Chinese ports increased their throughput. Shanghai saw slow growth but remained the world’s leading port, while growth in Tianjin was 6.4 per cent and Qingdao 4.8 per cent. In Europe and North America port performance varied.