The increase in the prices of raw materials was the main explanatory factor for the rebound in exports from Latin America and the Caribbean in 2021, highlighted a report by the Inter-American Development Bank (IDB).

The economic recovery, driven in part by fiscal and monetary stimuli in advanced economies, and the depreciation of the US dollar, played a fundamental role in the evolution of prices.

However, these factors are destined to be reversed and, in some cases, prices have already returned to a downward trend.

In any case, prices are still at historically high levels.

The report, entitled Estimates of trade trends in Latin America and the Caribbean, describes the behavior of the prices of some relevant raw materials for the region, as follows. 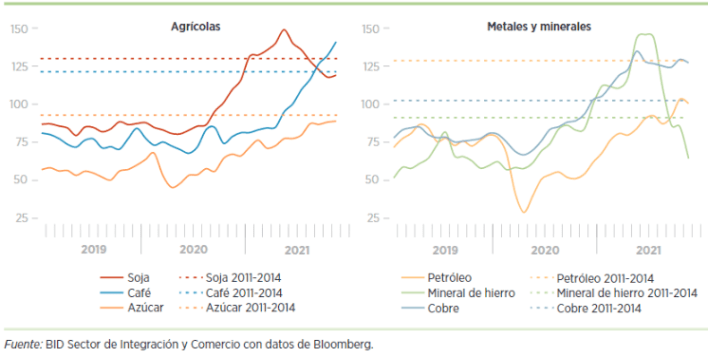 The price of soybeans barely showed the effects of the crisis during the first part of 2020.

Since August of that year, the price has risen uninterruptedly and the average level for January-November 2021 was 48.3% higher than the same period in 2020.

Starting in June, there was a change in trend explained by the improvement in expectations for the harvest in the United States.

Although it exceeded all-time highs, the levels reached at the end of 2021 were already at values ​​similar to those of a year ago.

The price of coffee only joined the expansionary trend in the second quarter of 2021.

At the beginning of the pandemic, the price remained substantially stable due to the fact that the supply restrictions due to the interruptions of the distribution chains that pushed prices up were offset by the lower demand in the framework of the containment measures that reduced the price.

However, as of the second quarter of 2021, the price of coffee entered a strongly expansionary trend, and between January and November accumulated a 39.3% year-on-year increase, exceeding historical levels over the end of the year.

Weather conditions in Brazil, the world’s leading producer, and commercial disruptions linked to Covid-19 in Asia explain much of the recent increase in the price.

This raw material, which had suffered a sharp decline at the beginning of the pandemic, recovered slowly but steadily.

Between January and November 2021, the interannual variation rate was 39.4%, bringing the levels close to the historical maximums.

The recovery in the price is due, on the one hand, to the increase in ethanol prices, which led to a greater use of sugarcane for its production in Brazil, the main exporter at a global level, and, on the other hand, to the expansion of world demand.

In the last months of the year, however, the price tended to stabilize due to the prospect of increased supply from India and Thailand.

Oil was the product most affected by the pandemic, but its recovery has been sustained and by early 2021 it had already recovered its previous levels.

On average, in the accumulated to November 2021 the price of crude oil accumulated an increase of 67.9% year-on-year.

However, as of mid-November, the trend has been reversed within the framework of the emergence of the new Omicron variant of the virus, which has limited the prospects for the expansion of global demand, and the increase in supply from the United States by a An attempt to stop the inflationary acceleration in that economy, to which was added the decision of the Organization of Petroleum Exporters (OPEC) and its partners to increase production levels as of 2022.

The price of this metal fell less in the context of the health crisis because the contraction in demand was accompanied by supply restrictions.

The rebound in the price in the recovery stage of world trade brought prices to historically high levels, even exceeding the highs of the beginning of the last decade.

However, some of the factors that explained the rise began to dissipate from the middle of the year: demand from China, the main global buyer, which had been driven mainly by fiscal stimulus, began to stabilize; disruptions in production due to measures related to confinement began to rise; and the demand for goods -including those that use copper as a raw material- slowed down.

The price of the Hierrono mineral suffered a negative impact in the most acute stage of the pandemic, although it did accompany the rebound. In January – November 2021, the price increased 59.4% year-on-year.

However, since August the price of the mineral entered a declining phase that brought it back to the levels of early 2020.

The change in trend is largely explained by the fall in Chinese demand, influenced by policies to control energy absorption by the steel industry in a context of supply problems, and efforts to reduce energy consumption. pollution levels before the next winter olympics.