An increasingly important concern is the aging of the fleet, as older ships are generally less efficient and generate higher emissions. 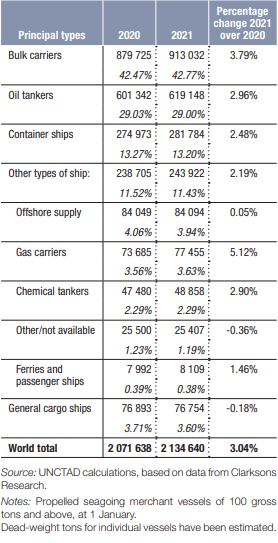 At the beginning of 2021, around 30% of the cargo capacity of the world fleet was in ships between five and nine years old.

Since 2017 this age has accounted for the highest proportion of capacity, but its proportion and that of the youngest vessels have been declining, while that of vessels aged 10-14 has been steadily increasing.

However, the age distribution varies between different economies.

The oldest ships are generally those from the least developed countries (LDCs), where about 30% are older than 20 years.

Compared to the developing group, or developed countries, LDCs also have a higher proportion of 15-19 year old ships.

However, UNCTAD expects global maritime trade to recover by 4.3% in 2021 and growth is projected to continue over the period 2022-2026, albeit at rates that will moderate with the moderation in global economic output.

While the short-term outlook is positive, the medium and long-term outlook remains uncertain: the recovery will be driven by the future trajectory of the pandemic and the associated lockdowns and restrictions.