On the other hand, on July 29, 2022, the Ministry of Finance and Public Credit submitted to the Colombian Congress the draft General Budget of the Nation for 2023 (Budget 2023) for a value of 391.4 billion pesos, which represents an increase of 11% with respect to the 2021 budget.

Then, on September 21, 2022, the joint Senate and House Economic Commission approved in first debate the draft Budget 2023, with an addition of 14.1 billion pesos for a total amount of 405.6 billion pesos.

The 2023 Budget will allow for expanded investment in infrastructure and social spending in all departments.

The 2023 Budget aims at social equity and equitable distribution throughout the country.

According to the Minister of Finance and Public Credit, the 2023 Budget represents 27.7% of the GDP and an increase of 15.1% compared to the previous year.

The sectors with the largest allocations are education (54.8 billion); health and social protection (50.2 billion); Ministry of Finance and Public Credit (48.7 billion); defense and police (48.3 billion); labor (37.9 billion) and social inclusion and reconciliation (17.8 billion).

This law complies with Article 361 of the Political Constitution, which favors the decentralization of State resources to the regions.

The approved budget is 81% higher than the previous one, with an increase of US$14 billion, the highest allocated to the regions since the General Royalties System came into operation in 2012.

Then, on October 17, 2022, the Ministry of Finance and Public Credit concluded the primary issuance of Public Debt Securities, through auctions for 2022.

This amount represents 90% of what was expected to be raised in the local public debt market at the beginning of the year.

The following tables show total public sector financed external debt (with an original maturity of more than one year) by type and by creditor: 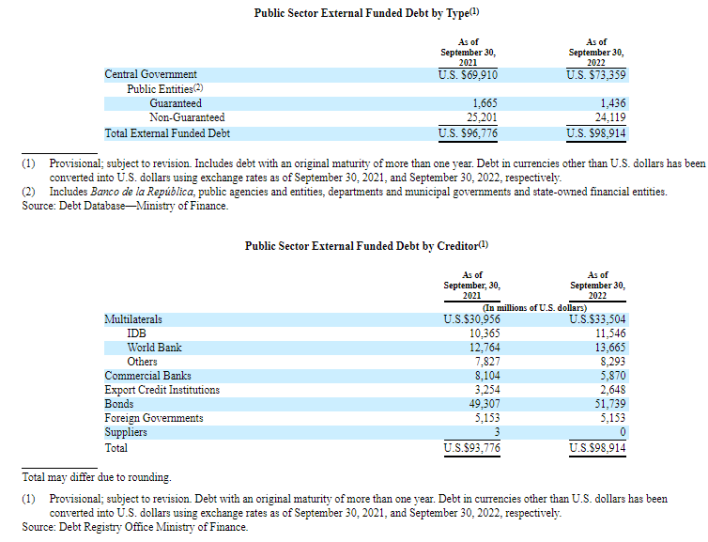