The collection in cash flow from foreign trade operations in Mexico was 870,000 million pesos, a year-on-year decrease of 10.7%, reported the SAT.

According to the federal government, internal contributions registered an increase of 7.1% in real terms in 2020 compared to 2019, which compensated for the low activity of foreign trade that had a tax decrease of 13.6% in real terms.

While internal contributions exclude those derived from international trade operations, foreign trade contributions refer to those related to the entry and exit of goods to the national territory.

Regarding foreign trade inspection, the SAT stated that it has placed special emphasis on identifying evasive behaviors in real time in the sectors with the highest risk (automotive, steel, textile and clothing, electronics, wines and spirits, among others).

In addition, the annual foreign trade inspection program plans to increase collection through the automation of processes and a greater perception of risk among taxpayers who carry out import and / or export operations.

In 2020, 50.8 billion pesos were collected for external trade inspection.

During 2020, despite the Covid-19 pandemic and its adverse effects on the economy, collection and control strategies were implemented to sustain tax collection.

This allowed, according to the SAT, that 3 trillion 338,900 million pesos were collected, which implied a nominal increase of 136,300 million pesos and a real growth of 0.8% compared to what was collected the previous year. 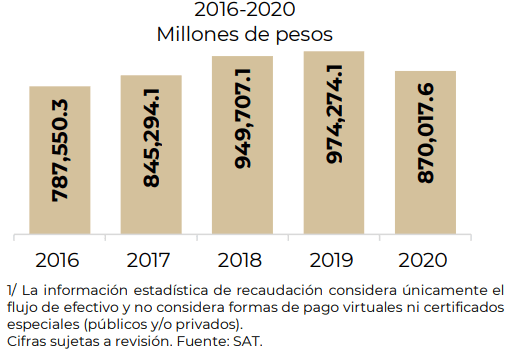