Coca-Cola FEMSA reported that it purchased sugar from Promotora Industrial Azucarera (PIASA) for Ps. 2.13 billion in the first nine months of 2022, an increase of 40.1% year-over-year.

The company also acquired sugar from Beta San Miguel for 547 million pesos from January to September of the current year, a reduction of 26.5%, at annual rate.

While it purchased sugar, cans and canning caps from Promotora Mexicana de Embotelladores for Ps. 517 million in the first nine months of 2021, its purchases from that company for the same concept were zero in the same period of 2022. 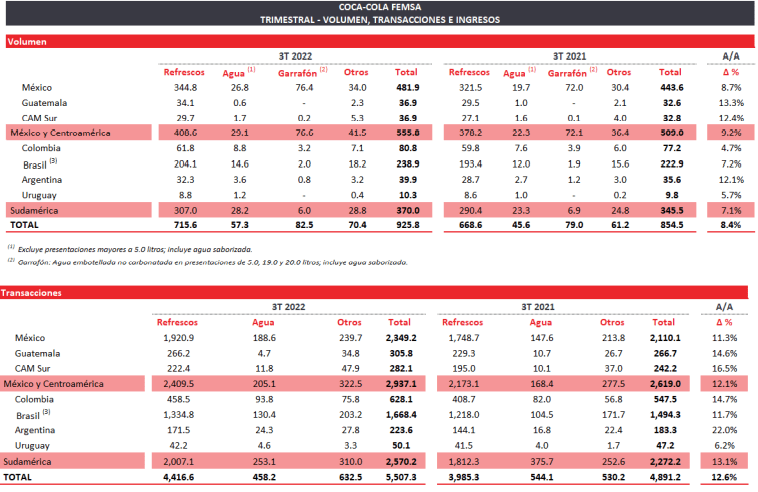 The company also purchases the HFCS of Ingredion Mexico and Almidones Mexicanos, known as Almex.

The beverage industry is evolving rapidly as a result of, among other things, regulatory changes and changes in consumer preferences.

In that regard, in recent years, governmental authorities in some of the places where Coca-Cola FEMSA operates have adopted different plans and actions, including tax increases or the imposition of new taxes on the sale of certain beverages and other regulatory measures, such as advertising restrictions for some of its products and additional regulations related to the labeling and sale of its products.

In addition, there are researchers, nutritionists and dietary guidelines that encourage consumers to reduce the consumption of certain beverages sweetened with sugar, artificial sweeteners and HFCS.

In addition, concerns about the impact of plastic on the environment could reduce consumption of products sold in plastic bottles or result in additional taxes that could also adversely affect demand.

Increased public concern regarding these issues, new or increased taxes, other regulatory measures, failure to satisfy consumer preferences, or the inability of Coca-Cola FEMSA to introduce new products or to digitize its operations and processes, could result in a reduction in demand for some of its products.