Coca-Cola FEMSA produced and sold 11.1% of the volume of the Coca-Cola system worldwide in 2019.

The Mexican company is the largest bottler of Coca-Cola trademark franchises in the world by sales volume.

In general terms, the characteristics of their territories are very diverse. Central Mexico and its territories in Argentina are densely populated and have a large number of competing beverage brands compared to the rest of its territories.

On the other hand, its territories in Brazil are densely populated, but have a lower consumption of beverages compared to Mexico. Uruguay has a high per capita consumption and low population density.

The company’s main competitors are local Pepsi bottlers and other bottlers and distributors of local beverage brands.

It also faces competition in many of its territories from low-priced beverage producers, commonly known as “B brands.”

Several of its competitors in Central America, Brazil, Argentina, and Colombia offer beer in addition to soft drinks, stills, and water, which may allow them to achieve distribution efficiencies. 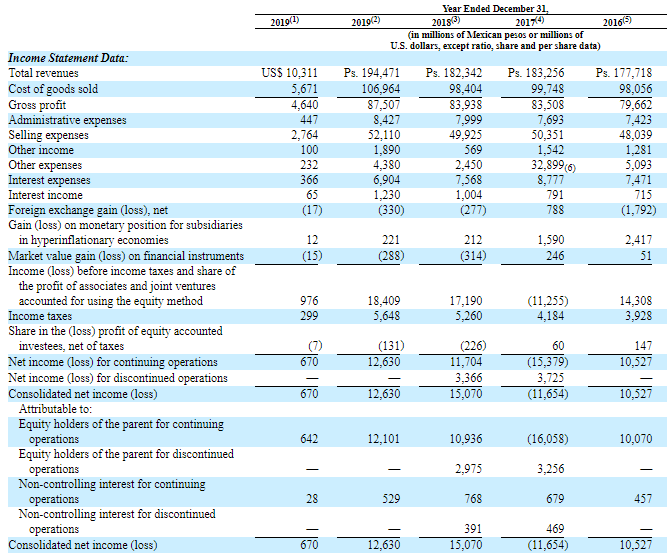 While competitive conditions are different in each of our territories, the company competes primarily in terms of price, packaging, effective promotional activities, access to retail outlets, and sufficient shelf space, customer service, product innovation, and retail alternatives products and the ability to identify and satisfy consumer preferences.

Coca-Cola FEMSA competes seeking to offer products at an attractive price in the different segments of its markets and taking advantage of the value of its brands.

The company believes that the introduction of new products and new presentations has been a significant competitive advantage that allows it to increase demand for its products, offer different options to consumers and increase new consumption opportunities.