Canadian National (CN) and Kansas City Southern (KCS) expect the merger between the two to be completed in the second half of 2022.

CP and KCS, two of the seven Class I companies that handle long-distance rail traffic in the United States, announced a merger agreement in March.

Then, in April, another Class I rail company, Canadian National, submitted what it called a “superior proposal” to acquire KCS, which was accepted in May.

For now, these last two companies are confident in their ability to obtain all necessary regulatory approvals, including from the Surface Transportation Board (STB) and the Federal Economic Competition Commission (COFECE) and the Federal Telecommunications Institute (IFT) in Mexico, according to Canadian National. 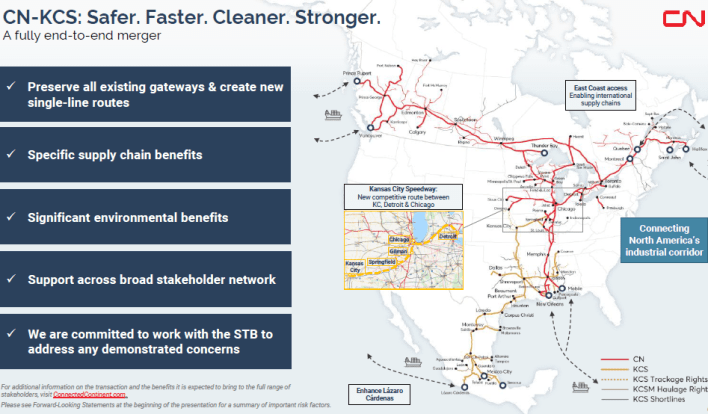 CN has proposed a “simple” voting trust. Upon approval of the transaction by KCS shareholders and compliance with customary closing conditions, Canadian National will acquire the KCS shares and place them in the voting trust.

KCS shareholders will receive consideration of the merger immediately after the closing of the CN voting trust, which is expected to be in the second half of 2021.

Following this step, the STB and other regulatory authorities must approve Canadian National’s control over KCS.

Also, according to Canadian National, the transaction is expected to be completed in the second half of 2022.

Upon completion, CN and KCS will begin the integration process to reap the significant benefits of the combination for their stakeholders.

If approved, this would be the largest consolidation of the major railroads in several decades and would create the first rail network to serve Canada, the United States and Mexico under a single corporate owner.

While this could lead to better service for some carriers, it could also have adverse consequences for freight competition, an analysis by the US Congress indicated.