China reduced the share of its exports of goods and services in its GDP from 36% in 2006 to 18.4% in 2019, highlighted an analysis by the European Parliament.

According to the same analysis, China has taken steps to realign its economic growth model on several occasions.

Since the mid-2000s, and especially after the global financial crisis of 2008, an earlier effort to reduce China’s economy’s dependence on exports has been known as the “rebalancing” strategy for the Chinese economy.

China and its peers: Imports and exports 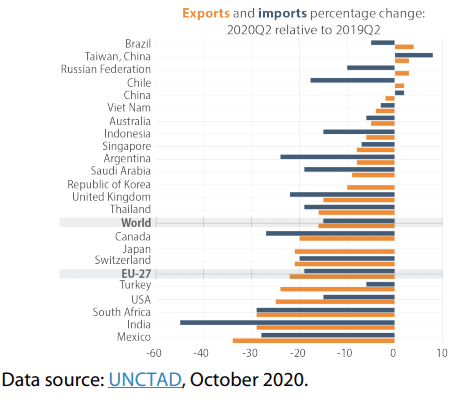 China’s economy was supposed to shift from an overly export- and investment-oriented double-digit growth model to a “new normal” of lower but more sustainable growth rates with a greater emphasis on domestic consumption, services and local innovation.

This rebalancing approach has included structural reforms on the supply side, especially to reduce excess capacity in areas such as steel and aluminum, but reform on the demand side has clearly lagged behind.

At 38.8% (2019), the share of Chinese private household consumption in nominal GDP is particularly low.