China reached 32% of global manufacturing value added (MVA), according to a report published by APEC.

From an overview, the APEC region has been producing around 60% of global manufacturing value added (MVA) for the past two decades.

China’s share of global global manufacturing value added tripled from 10% in 2000 to 32% in 2020, demonstrating its growing importance as a manufacturing hub.

However, the pandemic caused the closure of cities and factories in China in early 2020, and its merchandise exports fell 13.4% in the first quarter of 2020.

This phenomenon was repeated around the world in 2020.

As lockdowns and other movement control measures were implemented, global supply chains were disrupted through a domino effect and products from manufacturing centers were no longer produced or exported at the same rate. 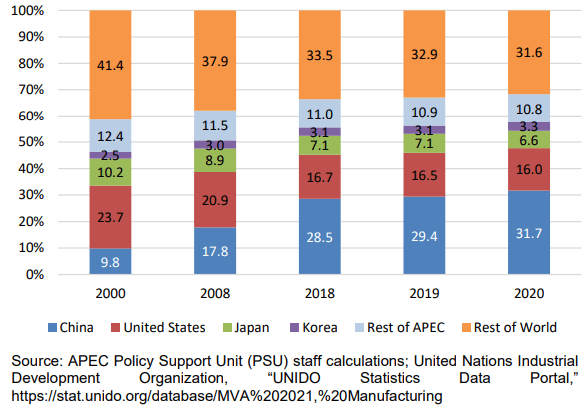 According to the publication, China’s lockdown in early 2020 has had a greater impact on global manufacturing than the severe acute respiratory syndrome (SARS) epidemic 18 years earlier.

In the intervening years, as reflected in China’s increasing share of global manufacturing value added, many industries have become heavily dependent on China’s inputs and finished goods.

At the same time, companies have been motivated to minimize supply chain costs by adopting only lean and on-time manufacturing methods, which leaves little room for redundancy or excess capacity and can expose them to the risk of disruptions. serious if even a single node along the supply chain breaks down, particularly in a central hub of production.

The early disruption in China

In the first four months of 2020, the APEC region experienced a 6.3% decrease in exports and a 5.5% contraction in imports compared to 2019.