Chilean cherry exports will increase by 13% in the 2019/2020 marketing year, reaching 259,000 tons, estimated the United States Department of Agriculture (USDA).

Likewise, the value of cherry exports climbed 43% and amounted to 1,200 million dollars.

China has established itself as Chile’s main market for this product, representing 90% of the total export volume, while the United States is the second main market.

However, Chilean cherry exports to the United States represent only 2% of total Chilean fresh cherry exports, and exports decreased 4.6% in the 2019/2020 season compared to the 2018/2019 season.

In early February, during the Covid-19 pandemic outbreak, at least 3,000 containers of Chilean cherries were on their way to or arriving in China, specifically with late-harvest varieties of cherries.

Chilean exporters stated that some of the maritime ships were delayed and some shipments were stuck in Chinese ports, which carried a high risk of losing those exports considering that cherries are a perishable product.

However, the shipments were eventually released and made it to the Chinese market. 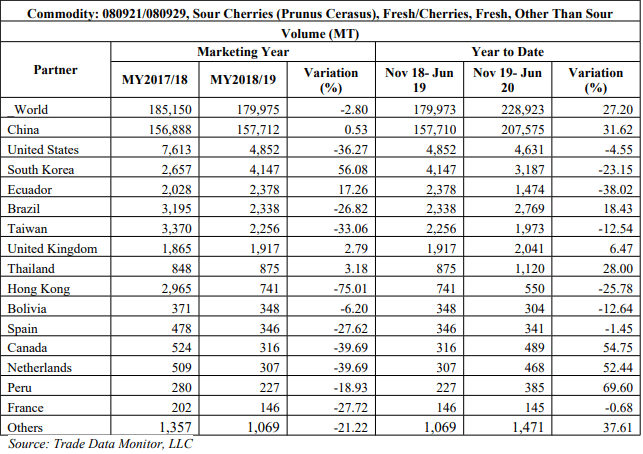 Chart: USDA.Despite difficulties and delays, the export volume of cherries to China increased 31.6% in the 2019/2020 marketing year compared to the 2018/2019 marketing year.