Cemex sold assets for $ 1.391 million to various companies between March 2019 and March 2020, including a transaction still to be completed.

Founded in 1906, the company controls companies whose main activities are oriented to the construction industry, through the production, commercialization, sale and distribution of cement, concrete, aggregates and other materials and services for construction.

As of March 31, 2020, through a subsidiary in the United Kingdom, Cemex had a firm commitment signed on January 8, 2020 with Breedon Group plc for the sale of certain assets in the amount of £ 155 million (192 million dollars), including 22 million dollars of debt.

Upon completion of the divestment, the Mexican company will continue to maintain significant UK operations related to the production and sale of cement, concrete, aggregates, asphalt and paving solutions.

On March 6, 2020, the sale of its US subsidiary, Kosmos Cement Company (Kosmos), a partnership with a subsidiary of BUZZI UNICEM SpA in which it had a 75% interest, was concluded to Eagle Materials Inc. for 665 million Dollars.

The resources that the Mexican company obtained from this transaction were $ 499 million before transactional costs and expenses and others.

The assets sold consist of the Kosmos cement plant in Louisville, Kentucky, as well as related assets that include seven distribution terminals and raw material reserves. 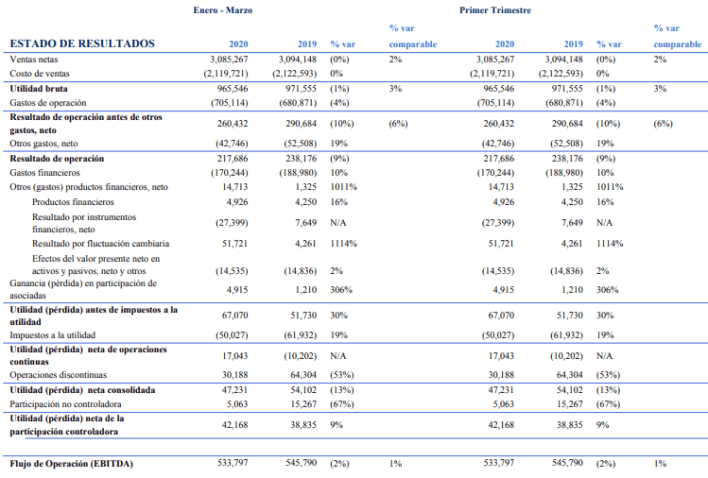 On June 28, 2019, it concluded the sale of its concrete and aggregates business in the central region of France with different counterparties for € 31.8 million ($ 36.2 million).

On May 31, 2019, the company completed the sale of its aggregates and concrete assets in the North and Northwest regions of Germany to GP Günter Papenburg AG for € 87 ($ 97 million).

On March 29, 2019, Cemex sold its assets in the Baltic and Nordic countries to the German construction materials group Schwenk for a price in euros equivalent to $ 387 million.

On March 29, 2019, he signed a definitive agreement with Çimsa Çimento Sanayi Ve Ticaret A.S. to sell its white cement business, except in Mexico and the United States, for a price of 180 million dollars, including the white cement plant in Buñol, Spain and its list of white cement clients.

The transaction is subject to completion by the authorization of the Spanish authorities.

Currently, he hopes to be able to close this sale during the first half of 2020.

Chicken imports from Mexico from the US were 459,500 t