The drop is equivalent to 10% in local currency terms, compared to the second quarter of 2019.

At the same time, operating EBITDA decreased 11% to $ 554 million during the second quarter of 2020 compared to the same period last year, a decrease of 6% in comparable terms for ongoing operations and the adjustment by exchange fluctuations.

Lower contributions from Mexico, the South America, Central America and Caribbean region, and Europe, Middle East, Africa, and Asia regions were partially offset by higher contributions in the United States.

Likewise, Cemex reported that during the second quarter of the year it reported a majority net loss of $ 43.7 million

The lower sales were mainly due to the containment measures applied in most of the markets in which the company operates.

However, the operating flow margin was 0.7 percentage points higher due to initiatives proactively implemented under “Operation Resilience”, where the company made significant cost containment efforts in all its businesses and geographies.

The decrease in consolidated net sales during the quarter was due to lower volumes for its three main products in almost all regions.

The United States was the only exception with cement volumes that grew 6 percent.

Operating income before other expenses, net, in the second quarter decreased 17%, in comparable terms, to $ 279 million.

On the other hand, the EBITDA in comparable terms decreased 6% during the quarter to 554 million dollars, compared to the same period of 2019.

Net debt plus perpetual notes increased by $ 51 million sequentially during the quarter.

“In the quarter, the volumes of our main products had a rapid recovery in the form of a V from the minimum levels observed in April, reaching slightly lower levels in June prior to the pandemic,” said Fernando González Olivieri, CEO of Cemex . 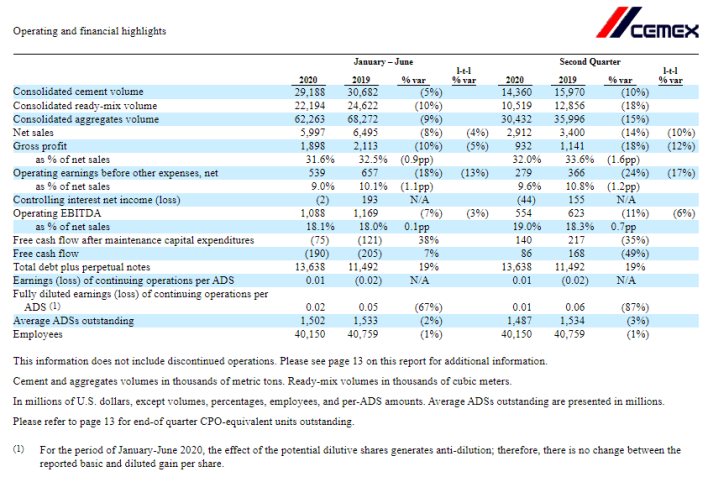