For its part, the portion corresponding to Mexico remained at 21% in both years.

As of December 31, 2020, the company had 91.5 million tons of annual installed cement production capacity, and its cement sales volumes in 2020 were 63.8 million tons.

Headquartered in Monterrey, Mexico, Cemex is one of the largest ready-mix concrete and aggregates companies in the world, with annual sales volumes of 47.0 million cubic meters and 132.8 million tons respectively, in each case based on their volumes. annual sales in 2020.

The company operates in different parts of the world, with operations in Mexico, the United States, the EMEAA region, and the SCA & C region. 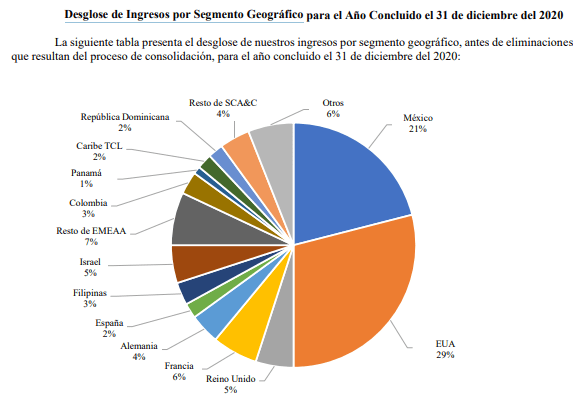 Starting in the late 1980s, Cemex undertook an important geographic expansion program with the intention of diversifying its cash flows and entering markets whose economic cycles within the cement industry operate independently of Mexico.

The company has built an extensive network of land and maritime distribution centers and terminals that give it commercial access around the world.

As part of its strategy, it also periodically reviews and adjusts its operations when implementing its post-merger integration processes, and also sells those assets that it considers to be less fundamental to its portfolio.