Car exports from Mexico (light vehicles) totaled 195,294 units in September, a decrease of 24.2% at the annual rate.

Among the factors that affected auto exports are the shortage of semiconductors and blockages on railways.

Also in the context of note is the Treaty between Mexico, the United States and Canada (USMCA), which entered into force on July 1, 2020 and included a series of changes in the rules of origin for the automotive sector. 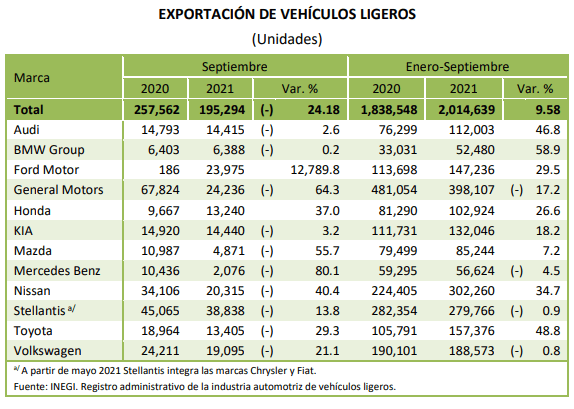 In particular, the USMCA requires that 75% of a vehicle’s content (70% for heavy trucks) be produced in North America, and that major auto parts originate in the United States, Canada, or Mexico.

After a phase-in period ending in 2023 for vehicles and 2027 for trucks, only products that meet these content requirements will receive import duty-free access.

According to the Department of Commerce, the USMCA requirements for the automotive industry are likely to provide new business opportunities for U.S. exporters with local Original Equipment Manufacturers (OEMs) and other suppliers in Mexico seeking Increase the percentage of inputs in its supply chains from North American sources.