Canada‘s labor market is emerging strongly from the fifth wave of the pandemic, with the economy adding almost 340,000 new jobs in February, more than making up for the loss in January.

Overall, Canada has seen the fastest jobs recovery in the G7, recovering 112% of the jobs lost at the start of the pandemic, compared to 90% in the United States.

With the February job gains, Canada’s unemployment rate dipped to 5.5%, falling below its pre-pandemic level for the first time, and close to the 50-year low of 5.4% hit in May 2019.

While many advanced economies have seen significant declines in their unemployment rate, few have also seen an increase in labor force participation to the extent that Canada has. 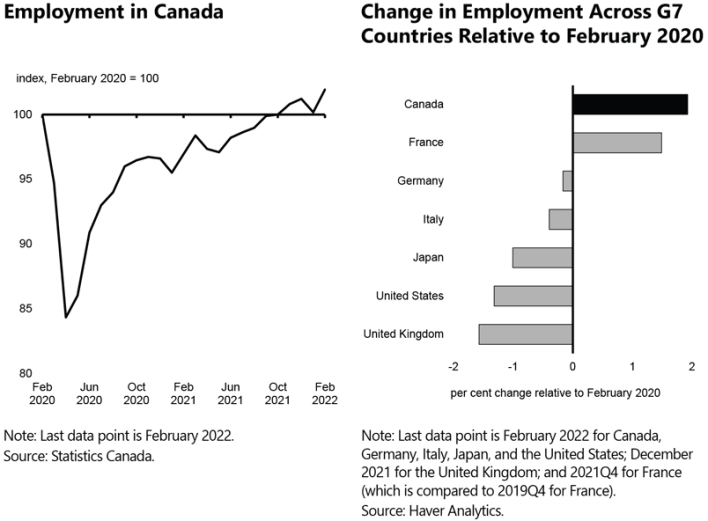 Also, according to the Government of Canada, while tight labor markets are creating better opportunities for workers, they also create significant and pressing challenges for businesses looking to hire more workers.

Employers were actively recruiting for more than 900,000 jobs in the fourth quarter of 2021, pointing to continued strong labor demand and the potential for wage growth to increase further.

Workers and businesses are still feeling the impacts of the pandemic, whether from the ongoing rebalancing of consumer demand and related supply chain issues, or by new realities such as the increase in remote work and the accelerated digitization of the economy.

Federal emergency aid has succeeded in stabilizing household finances, supporting millions of jobs and keeping small businesses afloat. And now, unemployment is lower than when the pandemic started.

However, the Canadian government noted that the global economy remains fragile and any potential setbacks could have a major impact on Canada.

The Russian invasion of Ukraine has caused the loss of thousands of lives and the exodus of millions of Ukrainians. For those watching from afar, the invasion is a major new source of uncertainty. The ramifications are being felt around the world.

Also the invasion of Ukraine and the resulting sanctions against Russia have weighed on markets and confidence; led to an increase in the prices of raw materials; and resulted in a deterioration of the global economic outlook.