With a greater dynamism in its imports, Canada registered a deficit in its merchandise trade balance of 1.14 billion Canadian dollars, Statistics Canada reported on Tuesday.

In March, Canada’s external purchases had an increase of 5.5%, while exports rose 0.3 percent.

On the one hand, imports of energy products (+ 54.7%) registered the highest increase in March.

Since the low observed in May 2020, imports of energy products have remained well below pre-pandemic levels and were 25% below their level in January 2020, when imports of these products peaked.

In particular, part of the increase in motor gasoline and crude oil imports originated in Texas, which was affected by extreme weather and power outages in February.

After falling 6.6% in February, imports of motor vehicles and spare parts increased 4.6% in March.

The drop in February was the result of slower production and shutdowns at several North American assembly plants due to a global shortage of semiconductor chips.

Although shortages persisted in March, the slowdown in production at assembly plants in general had more moderate impacts,  resulting in higher imports of motor vehicle engines and parts (+9.2%) and passenger cars and light trucks (+2.7%).

Despite the monthly growth, imports of motor vehicles and parts were down 4.2% in the first quarter of 2021.

Exports of non-energy products increased 2.0%, to 41,200 million, the third highest level on record.

In real (or volume) terms, total exports were down 0.3 percent. 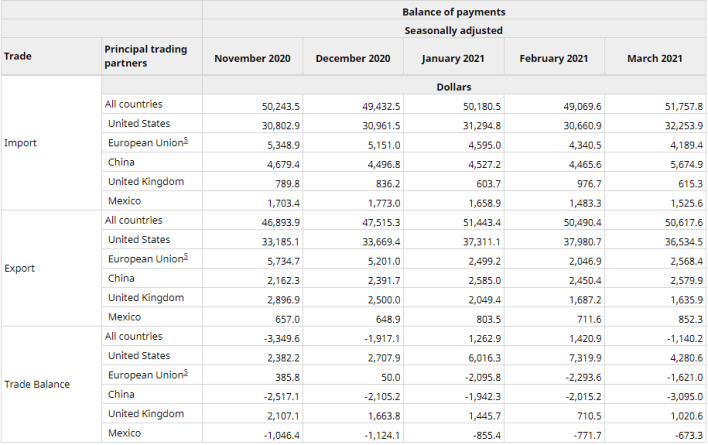 After falling 11.5% in February, exports of motor vehicles and spare parts increased 10.2% in March.

In the interior, passenger cars and light trucks (+12.8%) were the ones that contributed the most to the increase, since the production slowdowns were felt less in March than in February.

These slowdowns are expected to intensify and may have a greater impact on exports in April. Exports of motor vehicles and spare parts decreased 6.2% in the first quarter of 2021.