Therefore, Canada had a surplus of $ 594 million, Statistics Canada reported.

Both contractions were largely attributed to significant declines in the motor vehicle and parts trade.

More than anything, this was the result of production shutdowns in the auto assembly industry in April, due to a shortage of semiconductor chips. 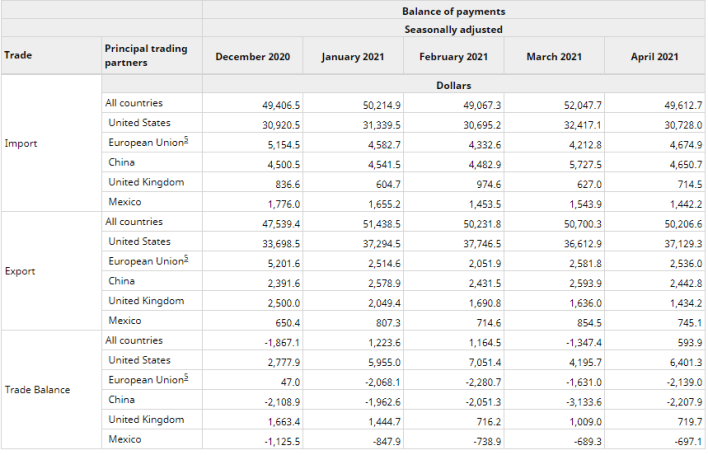 April’s surplus was the third in 2021, but its value represented less than 0.6% of total monthly merchandise trade.

In real (or volume) terms, total imports fell 6.8% in April.

In Canada, economic activity continued to recover in the first quarter of the year, registering 1.4% growth at a seasonally adjusted quarterly rate, after expanding 2.2% in the fourth quarter of 2020.

This growth reflected the dynamism of consumption and investment, which have benefited from low interest rates and government support for homes and businesses, as well as the growth of exports, which have been driven by the rebound in the economy. activity in the United States and higher oil prices.

In this context, the unemployment rate decreased from 8.8% in December to 8.1% in April.

According to Banxico, forward-looking indicators, such as the purchasing managers index of the manufacturing sector and business confidence, suggest a continuous expansion of said economy.

Canada’s imports of motor vehicles and parts declined 22.1% in April, to $ 6.6 billion.

Excluding the lows of the first wave of the pandemic in 2020, this represents the lowest level since February 2012.

Within this data, imports of cars and light trucks (-29.7%) and engines and spare parts (-20.2%) decreased significantly as a consequence of the fact that many automobile and spare parts manufacturers in North America and in the Overseas halted or reduced production due to a shortage of semiconductor chips.