Canada applies new guidelines in attracting foreign investment, highlighted the Report on the State of Investments in Canada 2021, released by the State Department.

Canadian direct investment abroad, by industry of the Canadian parent, 2020 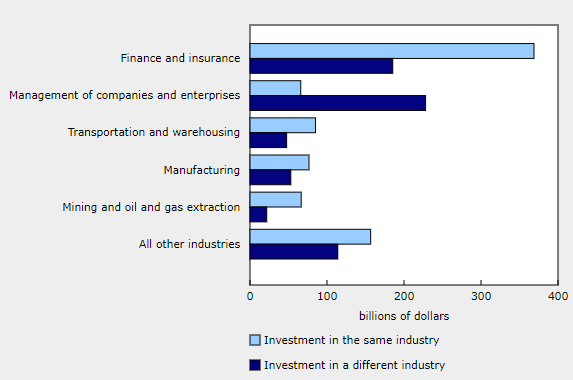 These include additional national security considerations, such as areas of sensitive technology, critical minerals, and sensitive personal data.

The new guidelines follow an April 2020 ICA update, which provides for increased scrutiny of foreign investments by state investors, as well as investments that involve the provision of critical goods and services.

The purpose of the ICA is to review significant foreign investments to ensure that they provide a net economic benefit and do not harm national security.

Ownership and corporate board restrictions prevent significant foreign investment in telecommunications and aviation, and there are deposit acceptance limitations for foreign banks.

Investments in cultural industries, such as book publishing, are required to be consistent with national cultural policies and to be of net benefit to Canada.

In addition, non-tariff barriers to trade between provinces and territories contribute to structural problems that have held back the productivity and competitiveness of Canada’s business sector.

Canada and the United States have one of the largest and most comprehensive investment relationships in the world.

According to the State Department, US investors are attracted to Canada’s strong economic fundamentals, its proximity to the US market, its highly skilled workforce, and its abundant resources.

The United States is Canada’s largest investor, accounting for 47% of total FDI.