BRP Inc. will complete the construction of its fourth plant in Mexico in fall 2021, where it will assemble Can-Am SSV.

It also represents its third factory in Ciudad Juárez.

At a comprehensive level, BRP manufactures its products in Australia, Austria, Canada, Finland, Mexico and the United States.

With more than 14,500 employees, the company maintains management and sales facilities in approximately 20 countries.

BRP has three manufacturing plants operating in Mexico, one of which is expanding.

The Company‘s Juarez 2 (Mexico) plant assembles SSV Can-Am, manufactures related components and produces SSV accessories such as bumpers, frames and brackets. Since 2017, the company nearly doubled its capacity in terms of units per hour at the Juárez 2 facility.

Since 2016, the facility in Querétaro has begun to gradually assemble the entire Sea-Doo PWC range and Sea-Doo PWC engines,

Thus, since January 2016, Sea-Doo PWC engines have been partially manufactured at the Gunskirchen (Austria) facilities and subsequently completed at the Querétaro facilities, with the exception of the Sea-Doo Spark PWC engines, which are produced entirely in Queretaro.

But the company stopped assembling SSVs at this facility during the second quarter of fiscal 2021 (ended January 31).

In addition, the facility manufactures components for Can-Am off-road vehicles and Can-Am Ryker 3WVs and produces ATV, SSV and Ryker 3WV accessories such as bumpers, frames, steering columns and brackets.

BRP manufactures its products in 11 facilities: one in Australia, one in Austria, one in Canada, one in Finland, three in Mexico, and four in the United States.

All Company facilities are owned by the Company, except the Juárez 2, Querétaro and Rovaniemi (Finland) plants, which are leased.

BRP’s origins date back to 1937, when founder Joseph-Armand Bombardier obtained his first patent for a tracked vehicle used to travel on snow.

In 1959, the company gave birth to the recreational snowmobile by introducing the first single-track two-passenger lightweight snowmobile under the Ski-Doo brand.

Then, in May 2020, in the context of the Covid-19 pandemic, BRP announced that it reoriented its marine business by focusing on growing its vessel brands with new technology and innovative marine products, and discontinuing production of engines outside of overboard Evinrude E-TEC at its facility in Sturtevant (United States), whose facility is being reused for new projects. 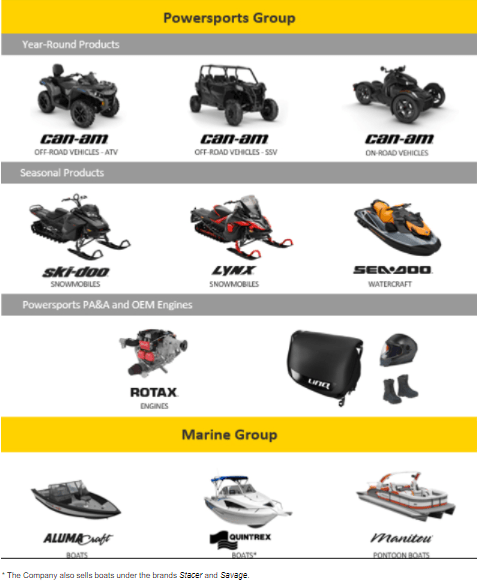 BRP is a world leader in the design, development, manufacture, distribution and marketing of motor sports vehicles and marine products.

The company’s diversified portfolio of brands and products includes, in the motorsports segment, year-round products such as Can-Am, SSV and 3WV all-terrain vehicles, seasonal products such as Ski-Doo and Lynx snowmobiles. and Sea-Doo PWC and Rotax engines for karts, motorcycles and recreational aircraft, and in the Marine segment, Alumacraft, Manitou, Quintrex, Stacer and Savage boats, and Rotax engines for jet boats.