Brazil‘s sugar exports would register a 9.3% drop in the 2021-2022 cycle (October-September), to 29.17 million tons, according to forecasts by the United States Department of Agriculture (USDA).

In general, Brazilian sugar exports have maintained a growing trend, from at least 7.7 million tons in the 2000-2001 cycle.

Today, Brazil is by far the world’s leading sugar exporter.

Sugar exports from this South American country had their historical maximum in the 2020-2021 cycle.

Above all, the projected decline for the 2021-2022 business cycle is due to the likely lower exportable surplus of sugar compared to the previous season.

Likewise, the significant devaluation of the Brazilian currency, the real, against the US dollar, should keep the Brazilian product highly competitive.

The probable deficit provides another incentive for Brazilian mills in the center-south to produce sugar for export, according to the USDA. 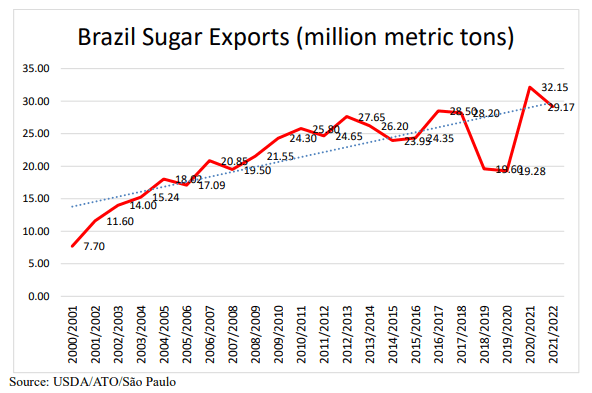 The revised estimate of Brazilian exports in the 2020/21 marketing year is 32.15 million tons, gross value, the highest volume exported by Brazil, which represents approximately 50% of world exports.

Brazil is followed by Thailand, India, Australia and Guatemala.

The USDA also projects the 2021/2022 Brazil commercial season (April-March) sugarcane harvest at 635 million tons, a decrease of 3% compared to the final estimate for the 2020/2021 season.

Among other factors, the dry weather that prevailed during 2020, especially during August-October, damaged sugarcane fields and reduced production potential.