Brazilian chicken meat exports grew at a year-on-year rate of 5.1% in the first four months of 2020, to 1,365 million tons, with all products considered, including fresh and processed, the Brazilian Association of Animal Proteins (ABPA) reported.

Globally, Brazil ranked in 2019 as the largest exporter of meat and poultry offal, with a value of $ 6.4 billion.

In foreign exchange earnings, the total balance of international chicken meat sales this year accumulated an increase of 0.5%, with 2,151 million dollars between January and April 2020, compared to 2,141 million the previous year.

Considering only April of the current year, there was a 4.7% retraction in the sector’s exports, with a total of 343,300 tons in that month and 360,100 tons in April of the previous year. 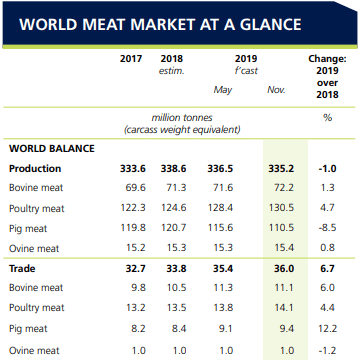 “In addition to the expected increase in sales to China, there was a considerable increase in exports to destinations in Africa, Asia and the Middle East. The sector is committed to maintaining the flow of exports in this pandemic period, “said Francisco Turra, president of ABPA.

World trade in meat and meat products is forecast at 36 million tonnes in 2019, 6.7% more than in 2018, mainly due to increased imports from China due to domestic shortages caused by production losses related to ASF , according to the latest FAO projections.

Total meat imports from China are expected to increase by 35% (about 2 million tonnes), with increased purchases across all meat categories.

Conversely, several countries are expected to import less meat, including the United States and Angola.

On the export side, FAO anticipates that much of the expected expansion in world demand will be met by Brazil, the European Union, the United States, Argentina, Thailand and Canada.

However, the limited availability of exports could depress meat shipments from Paraguay, Belarus and Uruguay.

The peso depreciates 27 cents against the dollar