The border between Texas and Mexico strengthens regional competitiveness and that of the United States and Mexico, the Texas government stressed.

Trade between the two nations generates more than 5 million jobs in the United States and trade between Texas and Mexico supports more than 382,000 jobs in Texas.

Of this, almost half of the Gross Domestic Product (GDP) in the border counties of Texas and two-thirds of the GDP in the border states of Mexico depend on international trade.

Much of this economic activity is related to Mexican manufacturing production, where companies in Mexico and the United States are partners in cross-border manufacturing through a process known as shared production, which means that the two countries work together to build and assemble products.

Border between Texas and Mexico

About 40% of the content of US imports from Mexico is produced in the United States.

According to the Texas government, this economic vitality associated with Mexican manufacturing, logistics services, and other trade-related businesses continues to support rapid population growth, strong job gains, and flourishing trade along the Mexico border. -U.S.

The border between Texas and Mexico is crucial for the supply chains of North America, where two of the four main Mexican importing and exporting states share a border with Texas: Coahuila and Nuevo León.

In general, this border is a key factor for the local, regional, state and national economies of the United States and Mexico.

The border facilitates the efficient flow of people and trade.

Over the decades, the economy of the Texas-Mexico border region has grown rapidly. 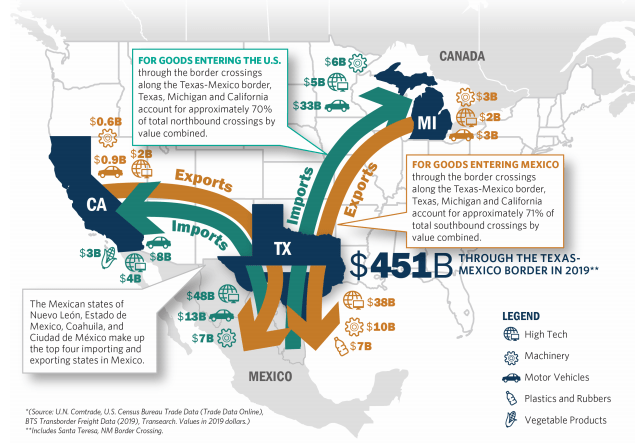 Regional job growth and cross-border trade continues, driven by the general North American population and the economic growth and trade and social ties of the border region.

Between 1990 and 2019, the border region (in the United States and Mexico together) experienced 97% job growth, from 1.5 million to 2.9 million jobs in both countries.