The BMW Group, Toyota and Audi stood out for their dynamism in the production of light vehicles in Mexico from January to August 2021, reported Inegi. 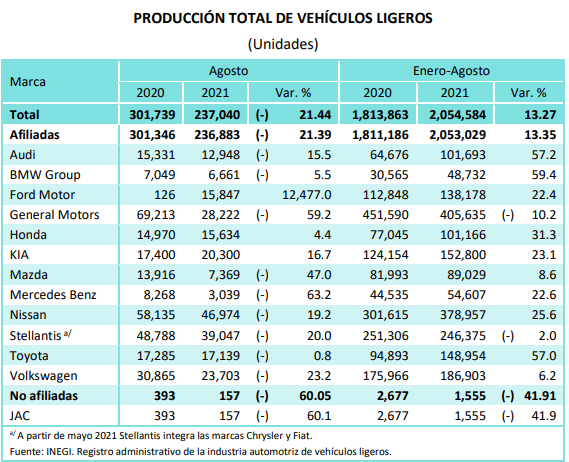 The Agreement between Mexico, the United States and Canada (USMCA) tightened the rules of origin of the automotive sector, which would entail a greater regional content in the production of motor vehicles, which benefits the producers of auto parts of the three countries.

Despite its performance in the first eight months of the year, the BMW Group reported growth of just 5.5% in the month of August, year-over-year, to 6,661 vehicles.

In recent months, the shortage of some inputs and bottlenecks in global supply chains have caused some effects on industrial activity worldwide, particularly in the automotive and electronic products sectors.

For this reason, in part, during the second quarter of 2021, the value of manufacturing exports, both automotive and non-automotive, showed moderate growth compared to the previous quarter.

In addition, according to Banxico, the advance in the value of automotive exports originated in a context of higher prices of this type of goods, since disruptions in the supply of various inputs have continued to affect their production and export volume.