The second quarter of 2020 saw the largest quarterly contraction in world economic activity since the Second World War.

However, according to the BIS, for the year as a whole, the drop in GDP was only 3.4%, a dire result in any normal year, but considerably better than projected at the height of the crisis. 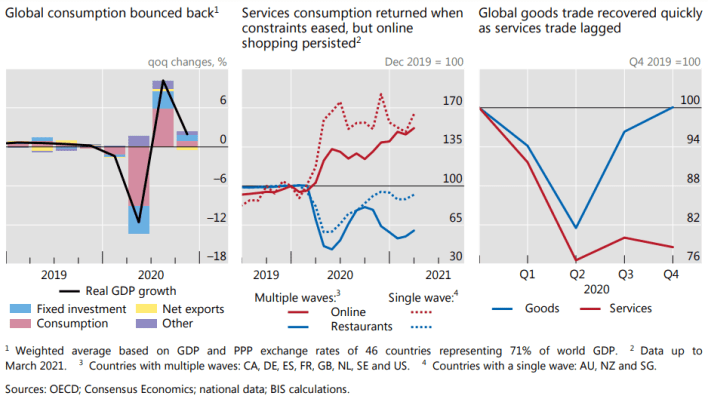 Why is the BIS important ?: The BIS is a forum for debate and a platform for cooperation between central banks and other financial authorities in the pursuit of monetary and financial stability.

A BIS report further argues that concerns that the pandemic could deal a lasting blow to global economic integration was also overly pessimistic.

For example, trade in goods recovered strongly after contracting almost 20% in the early first half of 2020, when supply disruptions wreaked havoc on production networks.

When supply pressures reappeared in early 2021, they reflected strong demand for goods such as electronic equipment and motor vehicles rather than disruptions in global value chains.

However, trade in services did not recover.

Most had entered the pandemic with relatively strong balance sheets, largely due to regulatory reforms after the Great Financial Crisis.

Low insolvency rates meant that the impact on asset quality was contained in relation to the sharp decline in GDP.

In fact, bank capitalization increased in many countries in 2020, in part due to restrictions on payments to shareholders and greater flexibility in classifying loans and enforcing regulations.

After declining early in the pandemic due to increased provisions against expected losses, bank profitability recovered in the United States and some smaller Euro Zone economies, although it remained low in Europe and Japan.

The number of banks with negative rating outlooks also remained high, especially in Europe and emerging market economies outside Asia.

This reflected the uncertain outlook for corporate insolvencies, as well as persistent challenges to bank profitability due to low interest rates and competition from technology companies.