Becle, the largest producer of tequila in the world and owner of the José Cuervo brand, prioritizes the organic growth of its portfolio and innovation.

Its extraordinary portfolio of more than 30 brands of alcoholic beverages, some of them owned, distributed worldwide, and some owned by third parties distributed only in Mexico, has been developed over the years to participate in key categories with a strong perspective of growth, serving the most relevant alcoholic beverage markets in the world and attending to key consumer preferences and trends. 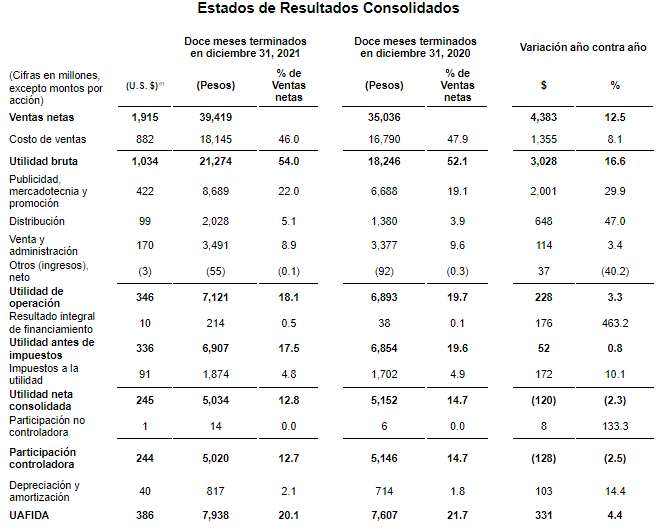 The strength of the company’s portfolio of brands is based on the deep legacy of its iconic brands developed in-house, such as the José Cuervo family of brands, combined with complementary acquisitions such as Three Olives, Hangar 1, Stranahan’s, Bushmills, Boodles and Pendleton, as well as a key focus on innovation.

With this approach, Becle developed its own world-known brands, such as 1800, Maestro Dobel, Centenario, Kraken, Jose Cuervo Margaritas and b:oost, among the company’s brands, some of which are marketed and distributed in more than 85 countries.

The company is one of the oldest companies in Mexico, led by the same family for 11 generations, whose legacy and tradition still define its business, brands and culture.

Within distilled spirits, the company is the world’s leading producer of tequila by volume with more than twice the market share of its closest competitor and the third largest producer of Irish whiskey in the world by volume and sales of according to IWSR in 2019.

The company generates most of its sales in the United States, a country that represents the most profitable and dynamic region of the distilled alcoholic beverages industry.

In addition to being its domestic market, Mexico is also the second most relevant market for the company, in terms of volume and sales.