Banxico reported this Wednesday that it projects Mexico‘s GDP growth of 4.8% in 2021, in its central scenario.

With this, Banxico revised this rate upwards, from the level of 3.3% that it had estimated at the end of 2020.

Specifically, these revisions are derived from both a higher growth base at the end of 2020, and a higher growth forecast for industrial activity in the United States, which in the short term will be partially offset by greater economic weakness at the beginning. 2021 due to the evolution of the pandemic in the country.

As in the previous Quarterly Report, the central scenario is accompanied by an upper and a lower limit in the level of activity, which reflect the high degree of uncertainty that still prevails.

The activity trajectories of the upper and lower limits are adjusted with respect to those presented in the previous Report under the following considerations:

The upper limit assumes less weakness at the beginning of 2021 and subsequently a more accelerated recovery than in the central scenario.

This is the result of a lesser effect on economic activity of the tightening of measures to contain the pandemic, a greater boost in external demand and a greater reactivation of various economic sectors and the labor market compared to what was assumed in the central scenario.

The latter possibly related to greater advances in the vaccination campaign both nationally and internationally.

The lower limit implies a greater impact on economic activity at the beginning of 2021.

This is as a result of impacts of greater duration and depth due to the measures to contain the pandemic than in the central scenario, and due to the uncertainty in relation to the continuity of fiscal incentives in various countries.

It is worth mentioning that in the central scenario, economic activity would recover the level observed at the end of 2019 towards the end of 2022. However, if the forecasts of the upper limit were met, these levels could be reached by the end of 2021. 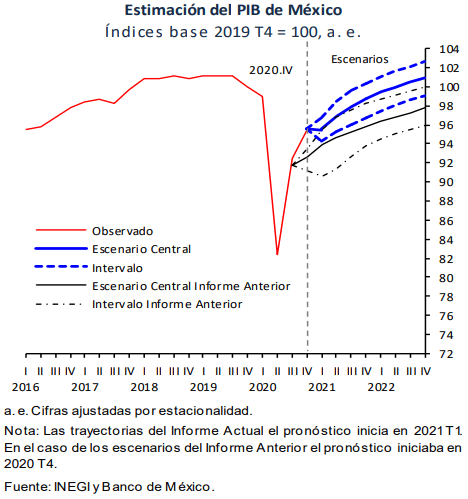 The performance of the economy is still subject to ups and downs, since the pandemic is still ongoing and the dynamics will respond to the differentiated behavior of the components of demand and of the productive sectors.

With regard to the cyclical position of the economy, it is anticipated that, after having continued to decline in the fourth quarter of 2020, slack conditions will continue to show considerable amplitude throughout the forecast horizon, albeit closing gradually.