The automotive industry boosted Mexico‘s exports in February, with a favorable balance in the trade balance of 1,293 million dollars.

In particular, according to Inegi, external sales of the automotive industry registered a year-on-year growth of 31.8%, to 14,251.9 million dollars.

While Mexico’s total exports were 46,246 million dollars in February, its imports totaled 44,953.1 million. 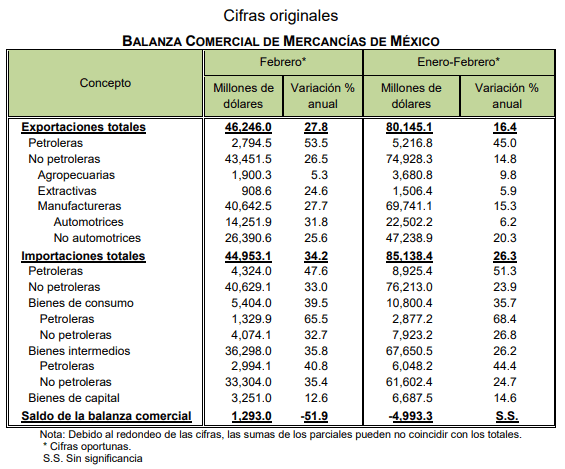 With this, foreign sales grew at an annual rate of 27.8% and foreign purchases increased 34.2 percent.

The annual increase in exports of automotive products was the result of advances of 27.2% in sales to the United States and 54.3% in those directed to other markets.

The automotive sector is one of the most important industries in Mexico, representing 20% ​​of the nation’s GDP and employing more than one million people throughout the country.

With seasonally adjusted figures, in February 2022 Mexico’s trade balance registered a surplus of 113 million dollars, while in January it presented a deficit of 2,566 million dollars.

In February 2022 and with seasonally adjusted figures, total exports reported a monthly increase of 16.03%, the result of growth of 16.18% in non-oil exports and 13.89% in oil exports.

Within non-oil exports, manufacturing presented a monthly advance of 16.71%. In turn, said rate was a reflection of increases of 34.73% in automotive exports and 9.30% in non-automotive manufacturing. About 89% of the vehicles produced in Mexico are exported, with 80% destined for the United States.