Total passenger traffic at ASUR in the first quarter of 2020 decreased 6.3%, compared to the previous year, to 12.9 million passengers.

The 8.1% year-on-year drop in passenger traffic in Mexico reflects decreases of 2.0% in domestic traffic and 12.3% in international traffic.

In particular, Cancun was the one with the highest drop in traffic, both domestic and international, reporting reductions of 5.1% and 12.8% respectively. 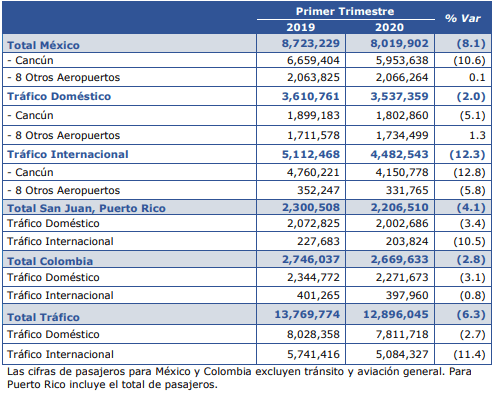 The impact due to COVID-19 occurred mainly in international passengers owing to the decrease in the operation of international airlines.

All Mexican ASUR airports remain open and operating at this time. Terminals 2 and 3 of the Cancun airport are closed due to lower demand.

In Puerto Rico, traffic decreased 4.1% year-on-year, reflecting decreases of 3.4% in domestic traffic and 10.5% in international traffic.

There, the Federal Aviation Administration (FAA) has accepted a request from the Governor of Puerto Rico that all flights to Puerto Rico land first at the Luis Muñoz Marín Airport (LMM) in San Juan, which is operated by the affiliate of ASUR Aerostar, and that its passengers be examined by representatives of the Puerto Rico Department of Health.

As a result, LMM airport continues to be open and operating, albeit with substantially reduced flight and passenger volumes by the end of the quarter. Because of government restrictions, only essential business spaces are open.

This is mainly due to the impact of COVID-19, which led the government of the Republic of Colombia to issue a suspension of commercial aviation for the country’s airports from March 25 to April 13, today extended to April 27. April 2020.

Peso ranges from profit to loss, at 24.8 units