Apple, Google and Microsoft have dominated the acquisitions of emerging Artificial Intelligence (AI) companies around the world, reported the United Nations Conference on Trade and Development (UNCTAD).

This classification is based on data from CBInsights consulted on January 22, 2021.

In general, one way that digital platforms are increasing their market power in the data value chain is by acquiring new companies and investing in horizontal and vertical expansion. 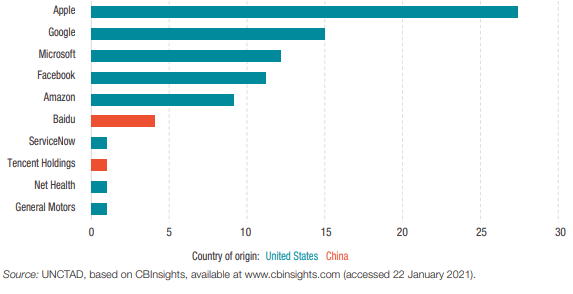 Digital platforms that handle big data are also the ones that have increasingly invested in artificial intelligence, which in turn helps them use data effectively, improve user experience, and attract new users (and data).

Therefore, these companies, and the countries where they are based, are in a better position with regard to AI leadership, as well as global data management, a crucial component of today’s digital economy and future growth in all industries.

Thus, the top five companies in the world, by number of AI startups acquired in the same period, were Big Tech companies from the United States, followed by Baidu (sixth) and Tencent (eighth) from China.

Apple led this ranking, followed by Google and Microsoft. For now, it appears that the AI ​​competition is purely based on expected future earnings and global leadership.

As major digital platforms enjoy the advantage of data, they are also increasingly investing in research and development related to artificial intelligence, which is seen as key to realizing future benefits from data processing and analysis.

Research in AI is carried out mainly in universities, research institutions and private companies.