Aquaculture accounts for 46% of the world’s fish production, emphasized the US biotech company AquaBounty Technologies.

According to the Food and Agriculture Organization of the United Nations (FAO), aquaculture was a $250 billion industry in 2018, and AquaBounty Technologies is targeting the $17 billion salmon farming segment of that industry. 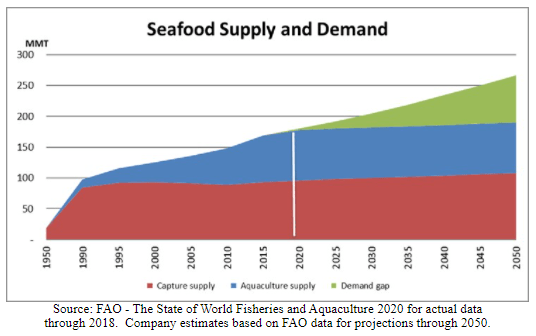 While the growing demand for fish protein cannot be met by traditional capture fisheries, the FAO states that more than 90% of the world’s fisheries are fully exploited or overexploited.

Feeding the growing population and meeting the demand for fish protein will require aquaculture production to almost double by 2050.

According to the FAO, the world population is expected to exceed 9 billion people by 2050, or a growth of approximately 26% in the next 28 years.

Along with this increase is a growing middle class with more disposable income, which is driving increased demand for protein food sources. And according to the FAO, global fish consumption has been growing faster than all other animal protein foods.

AquaBounty is a leader in the field of land-based aquaculture and the use of technology to improve its productivity and sustainability.

Its goal is to ensure the availability of high-quality seafood to meet growing global consumer demand, while also addressing critical production constraints in one of the most popular farmed species.

Their salmon was approved for production, sale and consumption in the United States on November 19, 2015 by the US Food and Drug Administration (FDA).